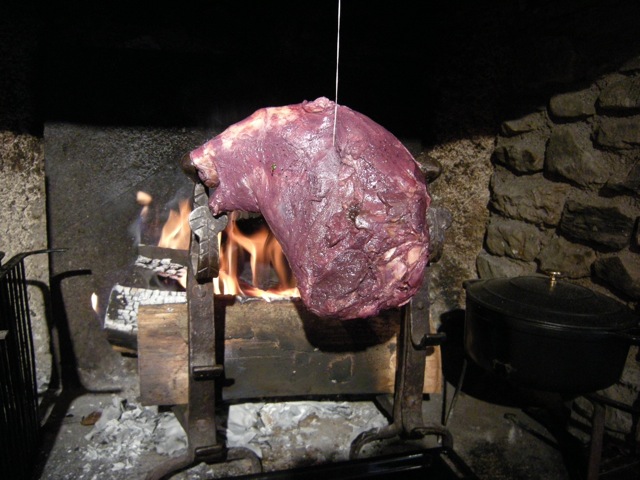 “No, I’m not coming to eat endangered animal meat,” says Miles. He is talking about the leg of izard, a.k.a:  Rupicapra pyrenaica or Pyrenean chamois I cooked on a string before an open fire a few days before our departure from Bourg d’Oueil.
Too bad & more for us! It is a very special occasion as Pierre, my husband, waited patiently for close to twenty years to taste this exquisite & very hard to hunt Pyrenean wild goat. And no, it is not an endangered animal (Miles overstated his case), though it is indeed a protected species.

My close friend Joseph Garcès had heard from my dad that Pierre never tasted izard, so he brought us a leg that was hunted as ethically as possible by his nephew Jean-Claude. In the Pyrenees getting izard meat as a present is a significant gauge of friendship and esteem, all the more so if you are offered the gigot (the leg), as it is the best cut.  It is short notice, but I am inviting Joseph and his partner Paulette to eat with us.
The leg is frozen as it was killed during the short and very regulated Izard hunting season last year. Once a year a team of garde chasse —government paid national hunting wardens— goes out to count the animals and apportion how many it will be safe to kill in a particular district. If the lot of apportioned animals is killed before the end of the hunting season, then the hunt is shut down for that year.

Izard hunting is not just a walk in the woods. It takes serious hiking and the chase can last a few days. The beautiful, elegant and fast wild goats rarely hang out below 6000 feet, except in the winter when there is snow and they come under the tree line to find food in the forest. Their weight averages about 60 lbs for a height of about 3 feet. They love to be on steep rock debris covered slopes, and often “perch” on top of a dramatic mountain peak. It is impressive to see them climb straight up these abrupt terrains with a fast and sure hoof. The izard is the totem animal of the Pyrenees. 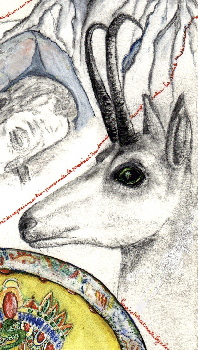 There are good reasons why izards are protected. The more disconcerting problem is the outbreak of the strange “Border Disease Virus” (BDV), a worldwide virus usually affecting only domesticated animals, that was detected around 2001 in the izard population. The pestivirus  Border disease virus, is closely related to Bovine virus diarrhea and Classical swine fever virus, not to be mistaken with the swine flu. At this point it is difficult to get accurate public information, but the general sense is that after the epidemic peaked around 2005, the situation has improved. It is still unknown why some areas of the Pyrenees are more affected than others.  My area is one of the less affected ones. There is always a few braconnier –poachers—, who hunt off-season, preferably in the winter when the animals are more vulnerable and easier to track. They use forbidden sniper rifles with silencers. If they get caught they can serve jail time & pay high fines. Another problem talked about is that the deer, introduced into the Pyrenees only in the 1970’s, deplete the resources the izards survive on, especially in winter. I will refrain from discussing the polemic subject of animal introduction or reintroduction in that region; this is a very heated topic especially when it comes to the bear issue.

This being said, it’s been more than 10 years that I ate a leg of izard. My brother Pierre, a barbeque expert, had roasted it inside his fireplace hanging on a string, and that’s the way I’m going to do it too:

Two days ahead I take the leg out of the freezer. The night before dinner I immerse it in a marinade of red wine, onions, garlic, herbs, pepper and a touch of honey —the one Joseph collects from his bees. I also install the nail inside the top frame of the hearth of the fireplace. I wanted to have about 3 hours before Joseph and Paulette were to arrive, but I got delayed visiting my dad and doing errands in town. I have only a couple of hours.  The priority is to start a roaring fire and get the leg going, I have no idea how long it will take. Remember, I have never done this on my own, though I draw heavily on my vivid recollections of that day I sat with my brother and watched the leg roast while we sipped wine by the fire and gave the leg a little push once a while. I must admit that I am a bit nervous although I am trying to underplay Pierre’s anxiety. Yes! I started a little late, but I will play with the adjustable length of the string and will prop the leg as needed to make the cooking as efficient as possible. I know how to do that! I make the spaetzle with fatback and dried cèpes —I had hoped for fresh ones but none were found while we were there, the terrain was too dry. The guests arrive. Pierre says “it’s gonna take for ever!” I ignore the comment and rush them into having apéritifs. Everybody is more relaxed after the first whisky! I sensed that Paulette was also a little suspicious of my undertaking. The leg is definitely roasting well and there is plenty of food to nibble on while we wait. We serve some sardine tartines and the delicious pâté de chevreuil —venison pâté—Paulette made, followed by fresh goat cheese & tomato toasts.
It is intense: one side of my brain is totally engaged in the conversation that reveals some aspects of my family history Joseph & Paulette know a lot about, and the other side is directly connected to the leg in the fire! I occasionally sit down for a sip of wine and a bite of pâté, but I am mostly standing next to the fire moving the leg around, brushing it with olive oil & garlic until it finally looks done. At which point we all gather around the fire, I poke the leg with a long knife and the verdict is unanimous, there is no blood running when I pull the knife out, which means the meat is cooked! Joseph masterfully carves the burgundy colored red meat, showing off his 20 years of Maître d’H experience —14 of which were spent working at my family hotel. We all eat a lot of meat. It is tender, moist, it melts in the mouth and it is not as gamy as I remember it.
I love the rare slices close to the bone. The red burgundy wine Joseph brought complements it beautifully (sorry I forgot to write down the info). 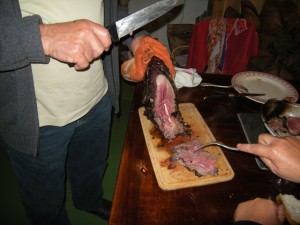 We are sated but …what about a little slice of Poubeau cheese? O yeah! Just a tiny piece to finish the wine! And we can’t possibly ignore Paulette’s scrumptious and light fondant au chocolat.  Beautiful, beautiful, beautiful, now let’s wash it all down with a 25 year old Armagnac to make sure we digest well!
Merci Joseph, Paulette et Jean-Claude! 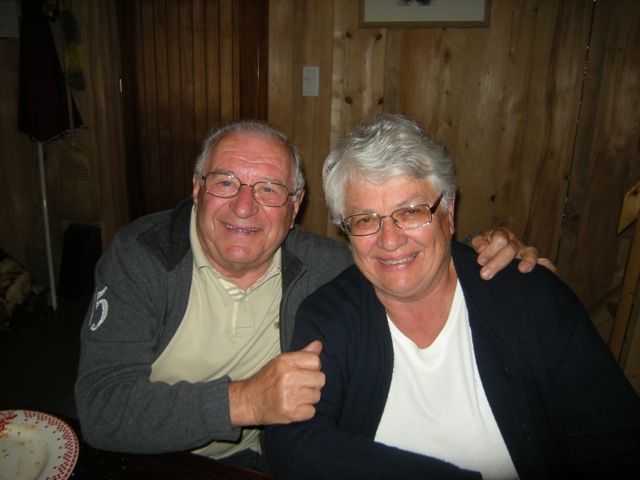