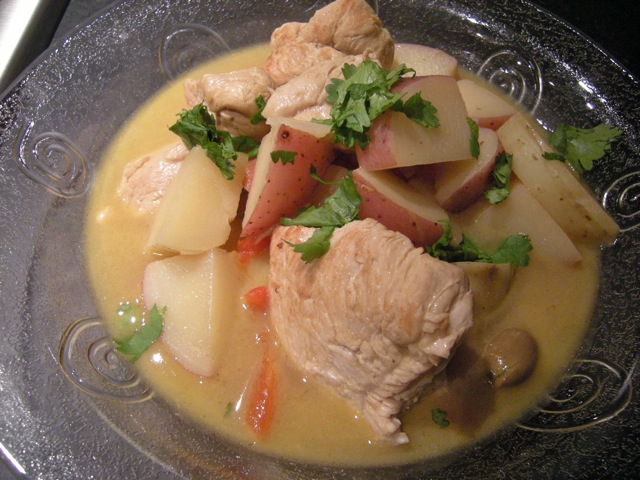 A râgout express is a contradiction in term. A stew should cook as long as possible. This being said let’s move on!
The term râgout covers a lot of territory. A good definition would be “a  well-seasoned meat or fish stew usually with vegetables.” The word ragoût comes from old French ra-gouster “to revive the taste”. We already find several ragoût recipes in Apicius’ cookbook De Re Coquinaria (25 AD). The Latin name for ragoût is: offella – a diminutive for offa which means “piece of meat, morsel”. As the name indicates, all those recipes call for some meat cut up into small pieces, a lot of spices and marinating in liquid, often wine or garum. The English equivalent is stew —from middle English stewen, to bathe in a steam bath; from old French estuver, possibly from vulgar Latin extufare, and from the Greek tuphos, source also for typhus and typhoid which provokes very high fevers.
Every cultures have some sort of ragoût. To name but a few: the Italians have ragús, the Mexicans have moles, the Spanish guisados.  They all emphasize the use of produce of their area, an  illustration of the local food culture. For example let’s take daube,  a typical french ragoût made with beef and red wine, in New Orleans it became: “daube de boeuf Créole” where the wine has been replaced by rum.  Have you tried it? I have not, but below are Elizabeth Davis ‘ words on it:

“The meat is studded with olives and cooked with rum instead of wine, and the curious point is that although the result is a very rich-tasting dish I think very few people would be able to detect the presence of rum, or to say in what precise way the stew differs from the French original”.

A big advantage of stews is that you can use the less expensive cuts of meat. After marinating over night or for several hours, and after the long simmering on top of the stove or in the oven the meat will be tender. If you use poultry, like in my recipe today, the meat is much leaner and will cook faster. It had too in my case!

So back to the story behind today’s recipe. We had to be out of the house at 7:30pm; it was 6:10pm. Pierre wanted to order out and I really didn’t. Any decent take out in our area takes 45 minutes and it’s expensive. I had a 2 lb turkey breast  in the fridge and I had planned to cook and eat it that night! Granted we ate a little fast and to be really honest the dish tasted better the next day, but that’s true of any stew.  Please look at the short video below for the recipe. I am still trying to find better ways to cook/film at the same time. Thank you for your patience and suggestions are always welcome!