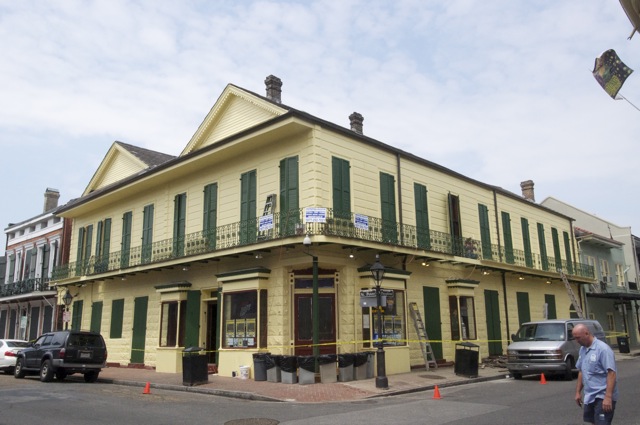 I got back Tuesday night from New Orleans. My mind still loops images, smells, tastes, & feelings. New Orleans is a place where present and past souls can mingle & converse  if one is attentive & tuned in:  a timeless, boundless & profound journey is all yours there!

First night out, my hosts, poets Megan Burns and Dave Brinks, took me to the launch of the anthology A Howling in the Wires. This collection of texts covers blogs, poems and stories in response to Hurricane Katrina and is edited by Sam Jasper and Mark Folse —see Megan Burn’s blog Solid Quarter for more details.
My last visit to Nola goes back to early November 2005, only a few months after the devastating hurricane Katrina. The French Quarter was slowly reopening for business, the rest of the city was still pretty empty, many areas were still without electricity, destruction was everywhere and people where still totally shell shocked. So, last Thursday’s reading brought me back five years later right into the midst of her/his-stories written back then — poignant offerings that touched & humbled me deeply. Despite the ordeal this community experienced having to go through the material and psychological reconstruction, their sense of dignity and humor, generosity and compassion is unaltered and contagious.  The volume is available on line and I recommend getting it: http://gallatin-and-toulouse-press.com/shop.html.

Of course, compared to my 2005 visit I found the city beautiful and vibrant.  Sunday was the 5th anniversary of Katrina and though you can still see  feel the stigma, people have moved on, and New Orleans feels to be a culture of the now. So thank you, David Brinks, Megan Burns, for hosting me, and for giving me the opportunity to perform at the “All-Hands-on-Deck” event. Thank you, Gina Ferrara and Jonathan Kline for getting together the last night like we did 5 years ago, talking longly and fondly.

It might take me a few postings to recount most of the moments, places & tastes, I wish to share… Voilà for the the first one. 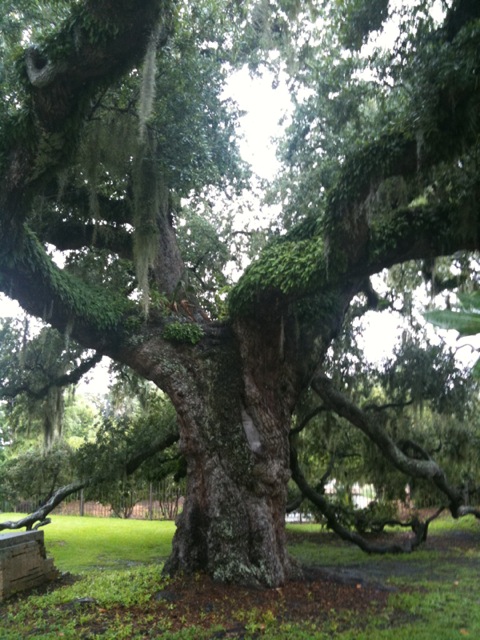 The centennial live oaks of City Park awed me as I reflected on the fact that they witnessed the Bayougoula, Mougoulacha, Chitimacha, Oumas, Tangipahoa, Colapissa, and Quinipissa native American tribes, along with many storms and hurricanes, as well as many duels. These evergreen oaks that have survived and outlived all kinds of weather, humans & other pests, for hundreds of years, induce a sense of temporal magnitude rarely experienced. 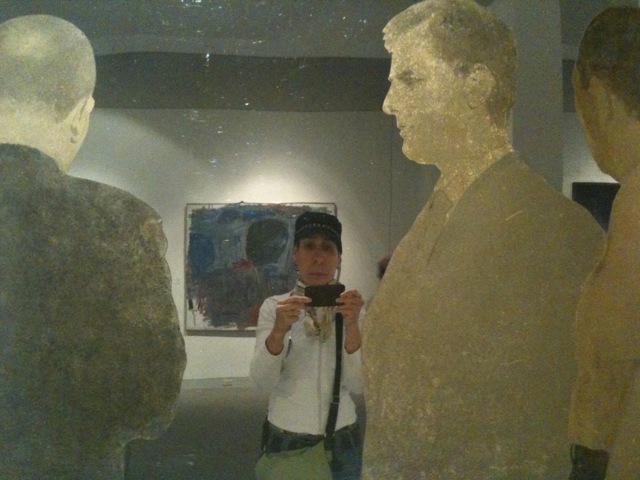 City Park also hosts the New Orleans Museum of Art. “Unframed but reflected by Michel Angelo Pistoletto” is the caption I posted when I uploaded the picture of this piece on my Facebook page. The mirror painting by Italian artist Michel Angelo Pistoletto raised another notion of temporality. Here, unlike the deep & linear temporality of the live oak, I faced and inscribed myself  as a non-chronological layer of time. You will notice the Philip Guston painting  reflected in the back.

Another painting that stood out for me and provided a not so linear experience was the piece by New Orleans artist George Rodrigue. He is famous for his blue dogs and his relief efforts for Katrina and the gulf. The Aioli Dinner was painted in 1971. Here is what the Museum has to say about the painting:

“The Aioli Dinner was Rodrigue’s first major painting with people. He designed the painting using combinations of photographs taken of the Aioli Gourmet Dinner Club, a group which met once a month on the lawn of a different plantation home in and around New Iberia, Louisiana.
Only men sat at the table, each with their own bottle of wine. The women standing in the back row cooked the food, and the young men around the table served dinner. One of the older men, however, made the aioli, a garlic-mayonnaise sauce. Rodrigue’s grandfather Jean Courrege sits on the left near the head of the table, and his uncle Emile is the third boy standing from the left, peaking his head in between the others. All of the figures are portraits of people who lived in and around New Iberia.
Rodrigue chose the lawn of the Darby House Plantation as the setting for his painting, because the house was still standing in 1970, when he began work on the piece (it has since been torn down). Today the paintings hangs at the New Orleans Museum of Art.”

Wendy Rodrigue, the artist’s wife, keeps a  blog where she gives interesting details about the painting and the Rodrigues‘ family history.  I like the naive quality of the painting very much, but what piqued my attention was the fact that it was called “Aioli Dinner” A très typical dish of the Provence region.  According to Wendy Rodrigue’s blog, the family insisted on their French background, and though I am just assuming that this was a family tradition, they must have come from the Provence region. The name aioli (alhòli) comes from Provençal alh ‘garlic’ (< Latin allium) + òli ‘oil’ (< Latin oleum). Often referred to as a garlicky mayonnaise, real Aioli has only olive oil and garlic. It is made by pounding garlic with olive oil and salt in a mortar until a smooth texture is obtained. Now a “grand aïoli “, also called “l’aïoli monstre” or simply “l’aïoli” consists of platters of poached salt cod (bacalau) — sometimes bigorneaux (winkles) are added — and a variety of steamed or poached seasonal vegetables with ample bowls of the hand-made garlic mayonnaise served as a wonderfully pungent accompaniment. Le grand aïoli is especially popular for large village gatherings. I will be sure to investigate the “Aioli Gourmet Dinner Club” more closely as I deepen my research on Southern French immigration to New Orleans. But that will be the topic of another post. 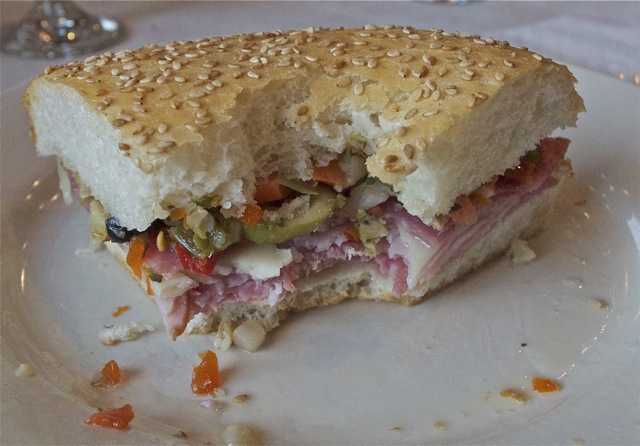 Today I will close with the trade mark sandwich of New Orleans the Muffuletta. These sandwiches can be found in many places in the Big Easy. Of Sicilian origin, this sandwich consists of a round loaf of bread about 10 inches across, filled with Italian salami, olive salad, cheese, Italian ham, and freshly minced garlic. The key ingredient is the olive salad that gives the sandwich its special flavor and pleasant look. 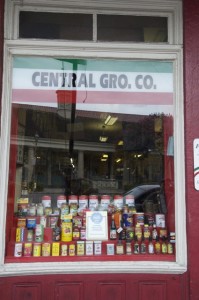 The Italian Market, Central Grocery on Decatur Street, proudly claims to be the home of “The Original Muffuletta.” The sandwich was supposedly invented in 1906, when an Italian immigrant, Signor Lupo Salvatore, owner of the Central Grocery, started making the sandwiches for the men who worked the nearby wharves and produce stalls of the French Market. I visited the beautiful store right after my beignet breakfast at Café du Monde so I decided to return on Sunday… Unfortunately Central Grocery is closed Sundays & Mondays. Really craving to sink my teeth into a Muffuletta I decided to settle for “Frank’s” restaurant next door. Their sign advertised “World Famous Original Muffuletta”, and though I have nothing to compare it with, I found it most delicious — and that comes from someone who is not much of a sandwich fan. I will try to make it, and found this recipe (which makes sense) on the “Nola Cuisine Blog. Stay tune for more! 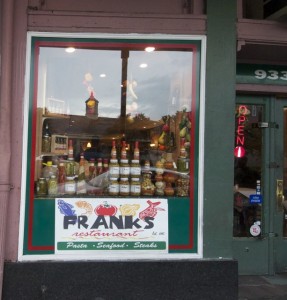 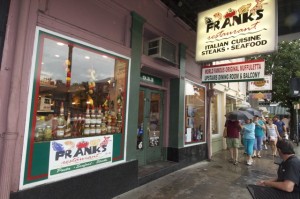