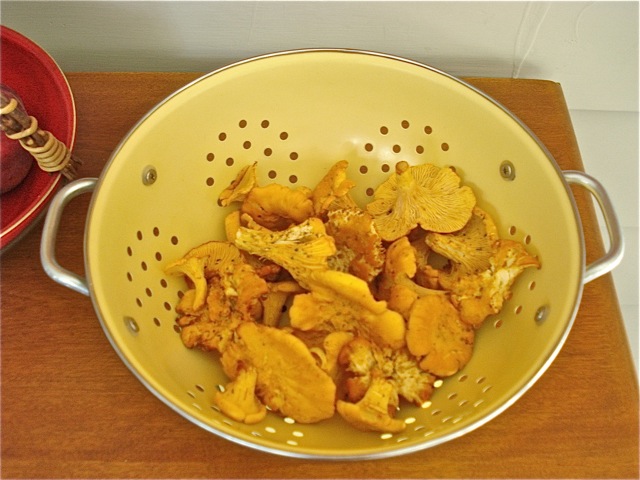 Last Tuesday we set out to surprise Douglas Rothschild while he was on his epic walk from Troy (N.Y) to Ithaca (N.Y). I will tell you more about this event in a later post, but Matvei Yankelevich had found the perfect spot for Pierre and I to perform our surprise intervention and then have a picnic aperitif. The secret rendez-vous was fixed by Anna Moschovakis who was with Douglas filming & recording the walk for a documentary film project.  The spot was in the Hoxie Gorge, just south of Cortland, N.Y. There was a place to hide, and then a place to relax next to a meandering stream where we sipped a beautiful blueberry wine just purchased up the road at Cherry Knoll Farm by Douglas & Anna. Usually I don’t like these wines, but this one was particularly good. Matvei had also spotted chanterelles and I had the honor of picking & keeping them!  What a beautiful omelet we had for breakfast the next morning at the lovely home of poet Lori Anderson-Moseman & Tom Moseman in Ithaca, where poet friend Matthew Klane was also visiting.

The recipe is simple:
I never wash chanterelles, but simply remove the dirt/sand with a soft brush or a soft, slightly damp cloth.
Cut them into two or four pieces depending on  size.

With a fork beat the eggs vigorously (2 per person).
add salt + pepper to taste

Heat olive oil with a dollop of butter in a pan, add the your chanterelles and cook over medium heat until soft, then add some garlic and parsley, toss for a few minutes and remove from the pan.

Wipe the pan clean and and return it to the stove with more olive oil and another dollop of butter. When it is really hot pour the egg batter into the pan. Begin to stir the eggs while letting them coagulate some and mixing it in with the more liquid part. When semi soft add the Chanterelles, & mix them in.  If you have a very good pan and le tour de main —that is, the knack for it — loosen the edges by shaking the pan and make the omelet curl on itself, slide it off at an angle onto a warm plate, let it settle for 30 seconds to a minute, and fold it.  If you need a little help use a spatula & fold over and slide it on a plate.

Also, before eating mushrooms you have gathered yourself make sure they are edible! You can find some info here. Once a friend  told me that it is a good idea to save a little piece of the mushroom in case there is a problem. We had been totally reassured by Matvei who is a connoisseur, as I  am more familiar with the Pyrenean ones I wanted to make sure we were not dealing with false chanterelles. Anyhow, we ate them and we are here to tell the tale. We had our omelet for breakfast, but it can make a great lunch and can be accompanied by my simple salad (video here)  and a little glass of light red wine!

Maybe time to reread  Elizabeth David’s book: An Omelette and a Glass of Wine ! 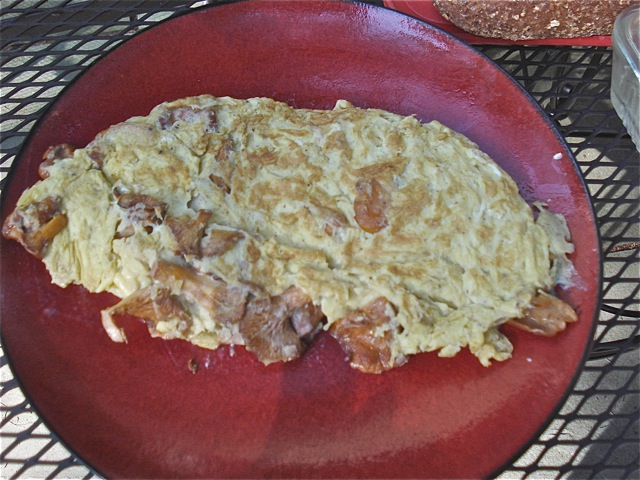