Wow! Since I returned from Chicago I have not had a chance to post to the blog. It has been insanely busy:

There is the ongoing work on Augustus Saint Gaudens with the documentary script writing advancing slowly but steadily.  I am trying  to clarify some aspects of his father’s life —Bernard Saint-Gaudens— in their early years in NYC. It is quite fascinating to dig into the history of this period and  discover that there was a lot of French political immigrants in NYC. They all mingled at a German tavern called Pfaff’s. I found some evidence that Bernard was among the patrons. A famous client of Pfaff’s was Walt Whitman! Chances are the two men crossed paths. Now that is exciting to me! But this week I had to put Augustus and Bernard on the back burner as I prepared to hang a painting show for the D’Artagnan 25th Anniversary Art Show.

Ariane Daguin, president of D’Artagan, is celebrating the 25th Anniversary of her company and it is quite a grand affair. 200 native Gascons have flown over the Atlantic to assist in the celebration.  It all started by a beret toss contest on 14th street an 9th Ave on Thursday at noon. The passersby had never seen such an event. Two festive bands —we call them bandas in the south of France— animated the competition. I was proud to participate and tossed my beret really far …we all took gold, silver and bronze and that was a glass of delicious and crisp Colombelle white wine, tasty Saucisson & hearty paté — provided by d’Artagnan, of course! Ariane and her company have brought a whole new line of food products to the American table. In many ways she is a role model both as a friend and as an entrepreneur. 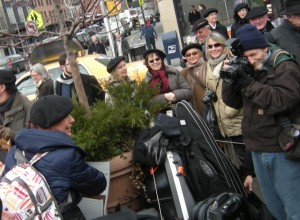 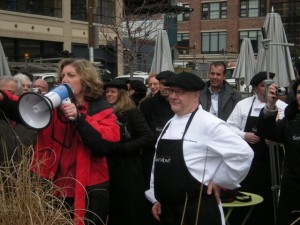 I can’t really get into the details of all the events, but the one I am most involved with is the art show. I am honored to be one of the Three Gascon Musketeers of Art picked by Ariane. I am also honored to show in the company of celebrated sculptor and rugby player Jean-Pierre Rives and famous Toulousain painter Michel Calvet.  I will show large canvases that have never been exhibited in the US before. I  hope to see you at the public opening on Tuesday February 23rd from 5-7 pm at: