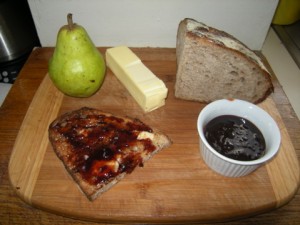 I have to share my enthusiasm for my breakfast. I even think about what I am going to eat for breakfast before falling asleep! And I got an acute case of breakfast obsession since my good friend Chef Pierre Landet gave me a jar of his homemade divine plum jam. Pierre is executive chef at the NYC Tribeca restaurant Cercle Rouge. He made the jam with his mother’s recipe for a very special occasion that we will discuss another time. But let me tell you about my breakfast routine, indeed a routine because the format is always the same, only the fruit and the topping of the bread vary.
I wake up early, make myself a cup of tea and get into my daily yoga practice. These days I am brewing a “Russian Caravan” tea from the Park Slope Food Coop. This pleasantly dry & flowery blended Chinese tea gets my taste buds off to a right start. When I am done with tea and practice, I make coffee; always organic and always light roast (also called American roast). I usually get whatever is on sale in that category at Porto Rico Importing Co. I like that company, their quality is consistent and their prices fair. Do not ever offer me French Roast coffee, I will turn it down, I dislike it with a passion, i consider it an aggression to my taste buds! 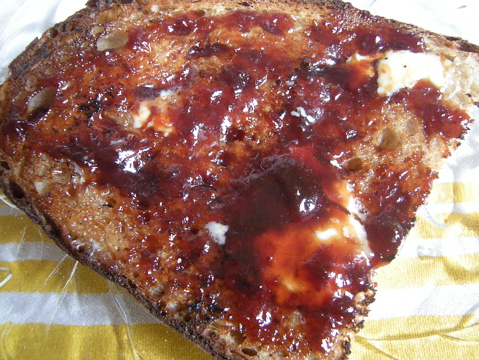 Anyhow, while coffee is percolating I toast my thick slices of rye bread and I eat a seasonal piece of fruit. I either get the Pain de Seigle from Balthazar or Amy’s Organic Miche at the Park Slope Food Coop. They both are a combination of wheat and rye organic flours, I find the Balthazar crustier and more complex, the taste stays in your mouth long after you have eaten the piece. Then, before the toast is cold but not while it is too hot, I apply a thin coat of either pasture butter, or Ben’s cream cheese or fresh goat cheese followed by the careful and even spreading of the sweet toping.
Pierre’s jam arrived at a really good time; I had just finished my special jar of raw honey made by my friend & Bourg d’Oueil mentor Joseph Garcès. So Pierre’s luscious plum jam provided not only the gusto satisfaction but also the emotional ingredient missed from Joseph’s honey. Voilà ze story: 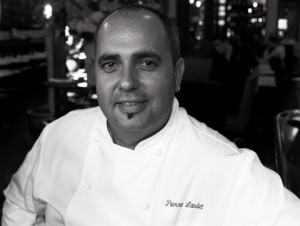 Pierre Landet is from the Toulouse region, but his brother Benoit & wife Laurence own the Hotel-Restaurant Le Faisan Doré in my hometown of Luchon (you know the center of the Pyrenées and possibly the center of the world!). It is my brother Jean-Louis’ favorite hang out and mine too when I am in town.

Pierre is a great chef, he cooks genuine Southwestern French country food. His homemade patés and terrines are outstanding, especially his Terrine de Foie Gras which is out of this world. I also have a soft spot for his funny chicken wings, the REAL French fries and I have to mention the stuffed suckling pig; that is a fire work of flavors and texture.

But let’s return to my tartine (though it is a French specialty to talk about a past or future meal while eating); the very slightly caramelized plum jam, flavored with vanilla and brandy, became a marriage in heaven when it encountered the crunchy, but still moist bread. I usually have 2 slices but sometimes I need 3 to complete the ritual properly!

Alright, merci to Pierre Landet pour la confiture and merci to his maman! It is quite late I must go to bed, tomorrow is the 2nd Bay Ridge Farmer’s market and I have to go early, last week it was all sold out by 11am! I have to make sure I can have breakfast without rushing! I forgot to mention that I really don’t like having breakfast out, nothing beats my petit-déjeuner bi-continental!

Ah! and in case you wonder:
YES, I dunk my tartine into my coffee!