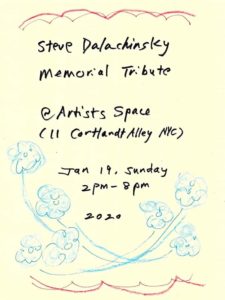 It is impossible to wrap my head around Steve’s departure. I met Steve and Yuko at an Art opening for Mary Beach in the early 2000.  When I permanently moved to NYC in 2007, they were incredibly supportive. They took me around and Steve got me several readings &  introduced me to a lot of great music & musiciens.

When I asked them to be part of my film Thing Fall Where They Lie along with Eric Sarner & Katalin Pataki, they were once again totally supportive. We shot for one week. These two pairs of artists had never met each other and their backgrounds were four different countries and four different mother-tongues. What was supposed to be some sort of historical portrait of Bagnères-de-Luchon, my hometown in the French Pyrenees, became an exercise in poetic drift through their personal  stories. They all fell in love with each other, they shared love for jazz and poetry — their sensitivities coupled with a joyous curiosity took over. For seven days, shooting in cinéma vérité style, I followed them in the once upon a time glamorous spa where we all re-imagined the lives of a famous jazz violinist and of Karl Marx’s grandson, both buried in Bagnères-de-Luchon.

Steve was inexhaustibly funny, smart, bringing so much to the group dynamic of group — & yes! He was happy for a full week! I personally never saw him so consistently happy for one full week.  I spent countless hours editing the film, and it truly was a joy, I loved looking at Steve on the screen, his soft gaze, his pursing lips, his deambulations….

We have not lost Steve, he departed before us.  Thank you for being you, Steve, and to you Yuko, be strong! We need you! Much much love and we hug you tight.

I am so blessed to have known you, Steve: you enriched and brought much joy to my life. I love you forever.

Steve’s last reading — shortly before the massive brain hemorrhage. He transitioned at 5:04 next morning:

EXCITING ANNOUNCEMENT:
Above is the trailer of my latest film:
THINGS FALL WHERE THEY LIE (2018)
Directed by Nicole Peyrafitte
RUN TIME: 57:43 m
Synopsis:
A filmmaker invites 4 characters for a 5-day visit to Bagnères-de-Luchon, the once-upon-a-time famous and fashionable spa town in the French Pyrenees. The four visitors are Eric Sarner, a poet, translator and broadcaster born in Algeria, now living in Berlin; his wife Katalin Pataki, a Hungarian-born librarian — they met when both lived in Uruguay; and Yuko Otomo, a poet and visual artist born and raised in Japan, who lives in New York with her husband, Brooklyn-born poet, visual artist and jazz critic Steve Dalachinsky. The film follows this group of real-life characters as they are prompted to react to a daily itinerary of (old folklore) events, mysterious (burial) places, excursions, and locals revealing — or not — the connections to the many layers of the town’s and the filmmaker’s history. Can Karl Marx’s grandchild and swing era jazz violinist Michel Warlop meet? Can four languages find each other over lunch and be the talk of the town? Who is buried in what grave? Where did that wedding ring roll? Is he a real shepherd and who is riding on the one (town) horse? What is a better clue: a prehistoric cave or a Spanish border town? Jump on the train and ride that line: Things Fall Where They Lie, and not the other way around. 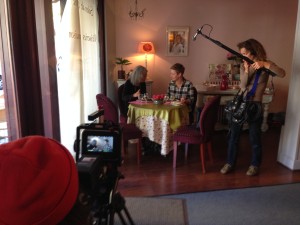 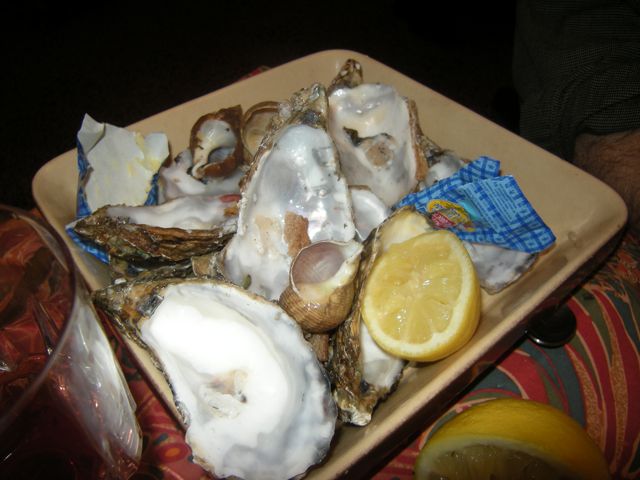 My last night in Paris was a good transition to return home. I first met up with a friend from my teenage years that I had not seen in 30 years! Bélinda and I reconnected via Facebook a few months ago. What I find totally fascinating in these reconnection stories —and that happened more than once this year— is the re-collection of my own forgotten memories. Bélinda de-fragmented my hard drive revealing a few events that I am sure glad to have recovered.
The first one was a luncheon at the famous Paris restaurant Chez Coconnas on Place des Vosges with Roland Dhordain.  Roland is a radioman —now long retired— who had been general manager of Radio France in 1965. He became a close friend of the family in the 1970’s. Bélinda also remembered us having Lunch at the Eiffel Tower with my parents the day  Jimmy Carter won the presidential election, so that was November 2nd 1976, I was 16 & Bélinda 18! Bélinda always wanted to be an English teacher and she became one! She loved purple and still does, though I didn’t notice her wearing purple mascara anymore! It was lovely to see her.

Around 7 PM we took off to rue de Rivoli to meet up with New York poet friends Yuko Otomo & Steve Dalachinsky. They had been on a European tour and they were reading at 59 rue de Rivoli for the  “Grand reopening of the Squat / Art Music Poesie”. Steve & Yuko kindly invited me to perform a few pieces. The set up was not an ideal situation for a poetry reading. Lots of people where going in and out to watch the multilevel art shows and there was no microphone. Despite the conditions, Yuko’s beautifully crafted bilingual (Japanese –English) haikus soared through the noise and fall gently into attentive ears. 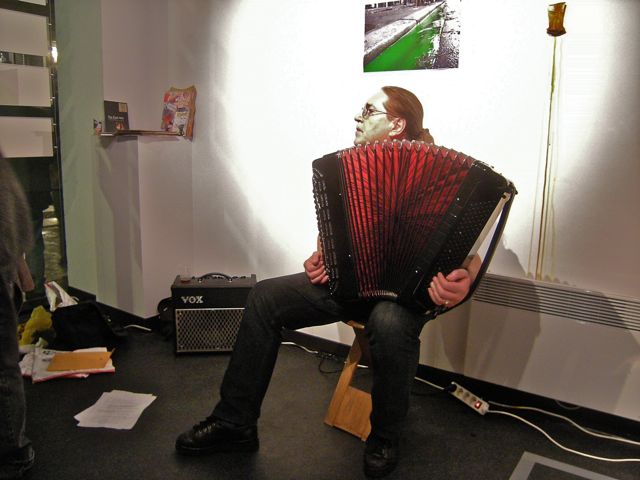 Steve mesmerized the crowd with his rhythmical & entrancing poems; an improvising accordion player called Claude Parlé accompanied him. Claude improvised on my pieces too. Once again my Gascon Southern French accent drew more attention in Paris than in NYC. So I took the opportunity to declare my allegiance to the Southwest — be it Southwest Brooklyn or Southwest Occitania — and proclaimed my self-declared nationality to be Gasco-Ricain! I performed “Things fall where they lie,”  “Cranes” and “Outer outer edges”.

Bélinda returned home after the reading. Steve, Yuko and I had a lovely walk back to my place in the 6th. When we passed the inviting outdoors oyster stand of Bistro de La Grille I couldn’t resist getting some to take back to the studio. On the video below you can see Steve skillfully carrying the mayonnaise and the shallot vinegar through Rue Guisarde. The oysters highly recommended by the écailler were Fine de Claire Nº2, I didn’t get to ask the  exact provenance; the transaction to take the oysters home was a little out of the ordinary but once I called onto the wonderful Thierry —manager for as long as I remember the place! — things eased up and we walked home with all the trimming I mention above, plus an overload of bulots, rye bread and beurre salé de Bretagne (j’ai pensé à Claire!). The oysters were delicious, very meaty and firm, not as green as the one we had in Angoulême but that was the specificity of that type of oysters. As for wine, I had bought a red Alsace wine. It had been recommended by the sommelier of the wine shop at the marché St-Germain. I asked for a light red that would go well with seafood or a light meal. He highly recommended a €10 biodynamic Alsace Pinot noir called “Lunatic”. With a name like this how could I pass. The Estate Barmès Buecher is located in Wettolsheim and totally dedicated to biodynamic  growing; this is what they say about it:

” Wine is made on the vine and not in the winery”
…We work the vineyards bio-dynamically, that’s to say with activated preparations, according to the influence of the planets and the apogee and perigee of the moon. No synthesized chemical product is used, neither in the vineyards nor in the winery.
The aim of this is to keep the initial balance of the grapes undisturbed, and not to mask the effect of the vintages, so that the wine can show its “terroir” to the maximum and to preserve the energy it has acquired (from the bio-dynamic culture of the vines).
The soils are ploughed and hoed between November and July and then we mow the grass from August to the harvest.
The vines are planted closely at a density of 6000 to 8000 plants per hectare to create maximum competition for the roots. This forces them to delve as deeply as possible.
No weedkillers or chemical fertilizers are used. If needed, we just use compost we make ourselves…more click here.

Many would argue about pairing red wine and oysters, but what can I say other than: this simple, clean, straight and dry red wine with a subtle tinge of red berries enchanted me! I loved it and so did my guests! Au diable les conventions!

Voilà! we ate, drank, talked into the late night — voir early morning— and when time came to separate I did something that is very Parisian among intimate friends: I gave them the trash to deposit downstairs! Now I am back home and as the song on the video says, I had a great time but  no regrets to leave Paris!