André Daguin, chef/owner of the Hôtel de France in Auch (Gers) until 1997, tells how he gave a new life to the tasty magret de canard — and made it famous in the process:

“The magret was served only as “confit” in soups, cassoulets and everyone would find it dry. The only way to avoid that was to cook it less, but no one dared. I had arguments with my customers; they couldn’t believe it was duck meat! Bob Daley, the New York Times journalist, reported on the discovery of this ‘new’ meat.”

In Occitan-Gascon the word magret —from the latin magre, literally means “lean”. It is definitely the leanest piece of the canard gras — that is the fattened moulard duck raised for foie gras. To make moulard ducks fat, force-feeding is required for a few weeks.

This ancient technique seems to be referenced as far back as the 5th century BC. The Moulard duck is a hybrid cross of Pekin and Muscovy duck. Do not confuse Moulard with the very lean wild Mallard duck.

The magret is the breast that is detached from the carcass once the liver had carefully being extracted. In the canard gras nothing goes to waste. The skin is rendered for fat; the fat is then used to simmer the legs and manchons (wings). Once cooked this meat is known as le confit. Le confit is then stored in earthenware pots, covered with fat to seal it, and used throughout the winter in various preparations. The hearts (look here), livers, gizzards are pan fried with garlic and parsley, the carcasses (called “demoiselles” —or the misses) & tongues are grilled in the fireplace for snacks.

Speaking of carcasses: in 1990, while  doing an internship at the Daguin’s restaurant I witnessed a “concours de demoiselles” organized by the Château St. Mont in Plaimont (Gers). The goal of the “carcass eating/cleaning contest” is to eat as many demoiselles as possible in the least amount of time while leaving the bones clean as a whistle. The winner then stepped on a Roman scale and the opposite pan was filled with cases of Château St. Mont wine until it balanced! 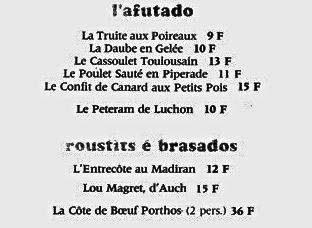 Another anecdote related to magret took place at the top floor restaurant of the Eiffel Tower in December of 1967. Jean & Renée Peyrafitte, my parents, & André & Jo Daguin, Ariane’s parents, were handed over the restaurant for La Quinzaine Midi-Pyrénées à la Tour Eiffel —two weeks of French Southwest fare in the skies of Paris — kind of the birth/ recognition of Cuisine du Terroir. I didn’t get to go, but I was 8 years old and I still remember all the excitement. The opening event was a banquet for the food writers and VIP’s. One of the most exciting items on the menu was the newly ‘dressed’ magret de canard. The magrets had been shipped from the Gers to arrive just on time, but on the morning of the event they had not yet arrived. The magrets were replaced with lamb and as in the Vatel story —though unlike Vatel my dad & André Daguin kept their calm and didn’t need to end their lifes over the problem— the magrets arrived during the luncheon. André Daguin, who like his daughter is never short of a creative idea when it comes to p.r., announced to the press that the magrets had just arrived; he showed them what they looked like, explained how to prepare them and one their way out all the diners were handed a magret wrapped in foil.  They got many write-ups, lot of word of mouth publicity and the restaurant was packed for the two full weeks!

Today you can purchase magret through the d’Artagnan website. Some specialty store have duck breast but most of the time there are Muscovy Duck breast, which are good but smaller.  One of my favorite recipe that I used to make often at the family restaurant is Magret with walnut and honey glaze. I made it the other night and yum! it is tasty.

Score the skin of the duck magret. Do not cut into the meat, only the skin.
Salt and pepper both side.
Place in a warm skillet on the skin side — no need to add  fat, the skin will render plenty.
Cook for about 8 minutes or so on the skin side —if you like it pink. More for well done.
Flip it over on the meat side for about 4 minutes.
Remove from the pan keep the magret between two plates to avoid loss of heat.
Drain the fat from the pan except for about 1 tablespoon—keep fat to sauté potatoes.
Sauté ½ cup of shallots until translucent.
Deglaze pan with 1/2 cup of Armagnac and flambé —I alway turn off the fan when I do it.
Add 1 tablespoon of honey and 1 cup of broth or better, some demi-glace. Let reduce, then add 2 Tbsp shelled walnuts —do not let the walnuts sit too long in the pan as they will give a bitter taste to your sauce.
Cut you magret in slices horizontally, pour all the juice in the sauce pan. At the last minute finish your sauce with a dollop of soft butter, salt & pepper to taste.
Serve with your favorite starch.
Thanks again and again to Renée Peyrafitte for saving & scanning the original documents.
Merci à André Daguin de répondre à mes questions.
And taben mercès pla ta l’amic Marc per l’ajude dab los mots en Gascon!
Adishatz! 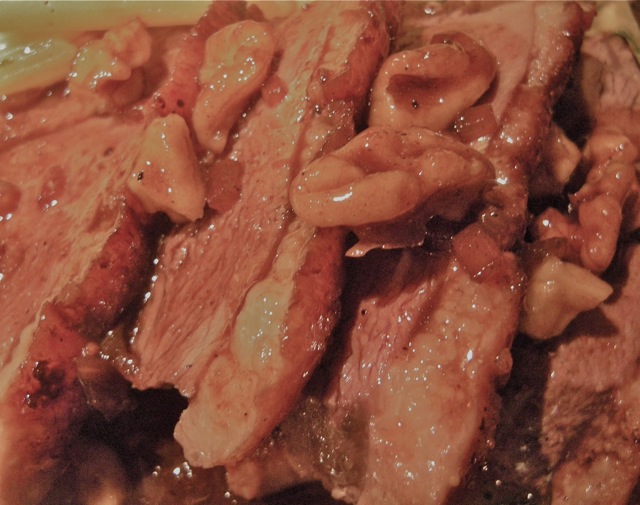