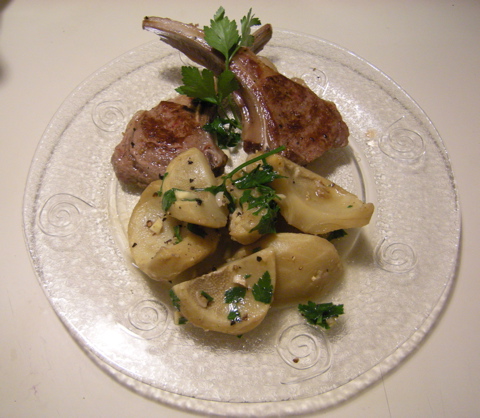 Still not much time to cook due to the last crunch on my next cd with Michael Bisio (title: “Whisk! Don’t Churn”) scheduled to be released on March 12 at Justin’s in Albany where it was recorded live November 20th 2008, remember?
We still had to eat and I must say I like the challenge of having to make something really quick with whatever is available or brought to me. Pierre went shopping; he strolled down to our favorite local store, Aunt Halime’s Halal Meat on 3rd Avenue and Ovinton, and brought back a beautiful rack of lamb, a bag of frozen artichoke bottoms (unusual to find artichokes bottoms, it is usually hearts) and got a nice bottle of Cahors at the local wine store. 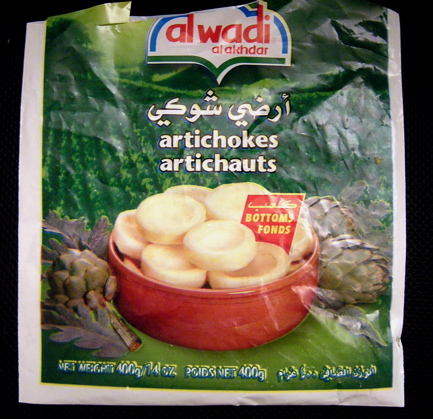 We decided that it was too much to make the entire rack for the two of us. I cut out 6 small chops and he took the rest up to Albany. The artichokes bottoms where a great accompaniments to the simply pan fried chops. I was also impressed by their quality; they were firm & flavorful, grown in Egypt and imported via Beirut, Lebanon. Of course I had to go visit the website, and the Alwadi company doesn’t look like a mom and pop’s business, but more like the Goya of Middle Eastern food. Still I can’t complain about the artichoke, au contraire, and they didn’t list any preservatives, which is rare for frozen artichokes. Though I will not use them too often as I am trying to be mindful of my carbon footprint!

This is how I prepared them:
I steamed artichokes for few minutes. I added olive oil & a dollop of butter to the same pan I had fried the lamb chops in, sautéed the bottoms cut an half for few minutes, adding 2 cloves of garlic. Before serving, add chopped parsley. C’est tout!
We shared the bottle of Cahors with the help of my son Joseph who stopped by for a drink and then we returned to our cd designing happy and satisfied!

Spätzle? Oui, oui… and I love them. Alright, not very French, but who’s French here? Pyrenean Gascon mountain girl comes first! So that works for the lamb…Humm! what about the Spätzle? I certainly never had them in the Pyrenees.
I acquired then via more Luxembourgish and Germanic influences. There are simple, delicious, nutritious & cheap to make.

This recipe fed me two meals:

Salt/pepper/nutmeg/parsley/1 egg/ 1/4 cup of water or enough to dilute it to a paste, and voilà the batter is ready

My set up at the stove

How to do it: I dump small amounts of dough in boiling water

Once they come up to the surface, they are cooked! I drained and reserved them

I sauteed some onions & bacon

Returned the drained spätzle to the pan, mixed them in and also added a little water to loosen up all stuck juices at the bottom of the pan…I really didn’t want to loose these “sucs” (not suck, i will have to explain “sucs” another time, remind me if i forget or if you really want to know, send a comment!)

But the best was two days later:

I reheated the left over over Spätzle in the cast iron pan in which I pan fried 3 delicious lamb shops. I complemented it with my favorite –and famous– simple green salad. The video for the green salad is available at:http://www.nicolepeyrafitte.com/cooking/cookingmemorabilia.html. It’s a segment of the cooking show: “Voilà Nicole!” (Producers Joseph Mastantuono & Nicole Peyrafitte). More info on that will be available very soon at: http://voilanicole.com/