Pierre is finishing up several books for 2020 publications and gearing up for many upcoming trips & I locked myself into my studio making new paintings for upcoming exhibitions.
2020 is going to be very busy and we’re already scheduling 2021. See below for details & snapshots from 2019, but first a few dates to save:

PIERRE
Friday May 1
Celebration reading by & party for Robert Kelly on the occasion of the publication of “A City Full of Voices: Essays on the Work of Robert Kelly” (Contra Mundum Press).
The Poetry Project / St. Mark’s Church
131 E. 10th Street, New York, NY 10003

PUBLICATIONS:
Given that 2020 will be the 100th birth- & the 50th death-year of Paul Celan, there will no doubt be a number of other events around his life & work in which Pierre will partake. His final two Celan translations are coming out in summer & fall of this year: “Microliths  they are, Little Stones” (Posthumous prose) from Contra Mundum Press & “Memory Rose into Threshold Speech: The Collected Earlier Poetry” from Farrar Strauss & Giroux.
& to RUSH even further ahead & then right back to SUM UP the year ending now:

Notes from the Domopoetics studio:

So, some of our intense 2019 activity — such as the October/November visit to the prehistoric caves & overhangs of the Dordogne and, majorly, the 5-day internship at the Gargas caves in the Pyrenees, close to where Nicole was born & raised — was specifically undertaken as r&r (no, not rest & recuperation: reconnaissance & research) for the upcoming Karstic Action show.

Those 2 weeks came after a first stop in Paris (& a 3-day trip to the Frankfurt book fair by Pierre) & continued with a week in our place in Bourg d’Oueil (r&r? no: family visits, & first tentative steps at making clay pots that may or may not become the food vessels for the 2021 actions) followed by 8 days that were supposed to be quiet, meditative (r&r? finally!) days in Venice with a yoga workshop, visits to galleries, churches & the Biennale. Except of course that we arrived as the Acqua Altas equinox tide flooded 90% of the city, the worst in 1/2 century, so that we also spent a fair amount in r&r (recon & research) to find, first rubber boots and then open food stores. Still, an intense time was had, too much to report here, though mention must be made of what was one of our favorites pieces at the Biennale: Lawrence Abu Hamdan’s (recipient of the 2019 Turner Prize) single channel video installation “Walled Unwalled” — for which, as it turned out, son Joseph was the colorist.

We returned to Brooklyn to the happy news that Joseph — as producer, this time — and Cameroon-American film-maker Ellie Foumbi’s feature project “Mon père, le diable” had been selected for funding in the 2019/2020 edition of the Venice Biennale College! Hopefully no one will need rubber boots for the film’s premiere scheduled for the Mostra de Venice end of August 2020!

Miles has been just as busy this year, with his second feature, “Dreamland” — starring (and co-produced by) Margot Robbie — premiering to very good reviews at the Tribeca Film Festival in April. This fall “Gaslight” a mystery story produced by QCODE & written & directed by Miles aired to excellent response. You can check it our here. He has meanwhile also written a new horror-thriller film script — “The Hunter and the Fox” — for Annapurna Pictures & is at one of the many (& somewhat confusing to us) pre-production stages as he will also direct this film.

In resistance and persistence forward into the new decade. Stay strong, keep your spirits up and do keep in touch,

Our 5-week show at la Galerie Simoncini in Luxembourg is coming to an end this weekend and we will have a grand finissage on Saturday Nov 25th with a performance at 4:00 pm.
This great run was deeply saddened by the sudden, though peaceful passing of my beloved 95 years old dad, Jean Peyrafitte, on November 11 2017 (press). We talked on Facetime almost everyday, so he got to follow me everywhere we went. I will miss him immensely and I don’t yet fully realize how much, but one thing he taught me is that the show must go on— gratefully and sans glitch! He had a beautiful sendoff ceremony and it was heart-warming to see the huge crowd who came to pay him their last respects. We are now on our way back to Luxembourg for the finissage.

In October Radio Tele Luxembourg came to tape a show that aired last weekend. Here is the link: 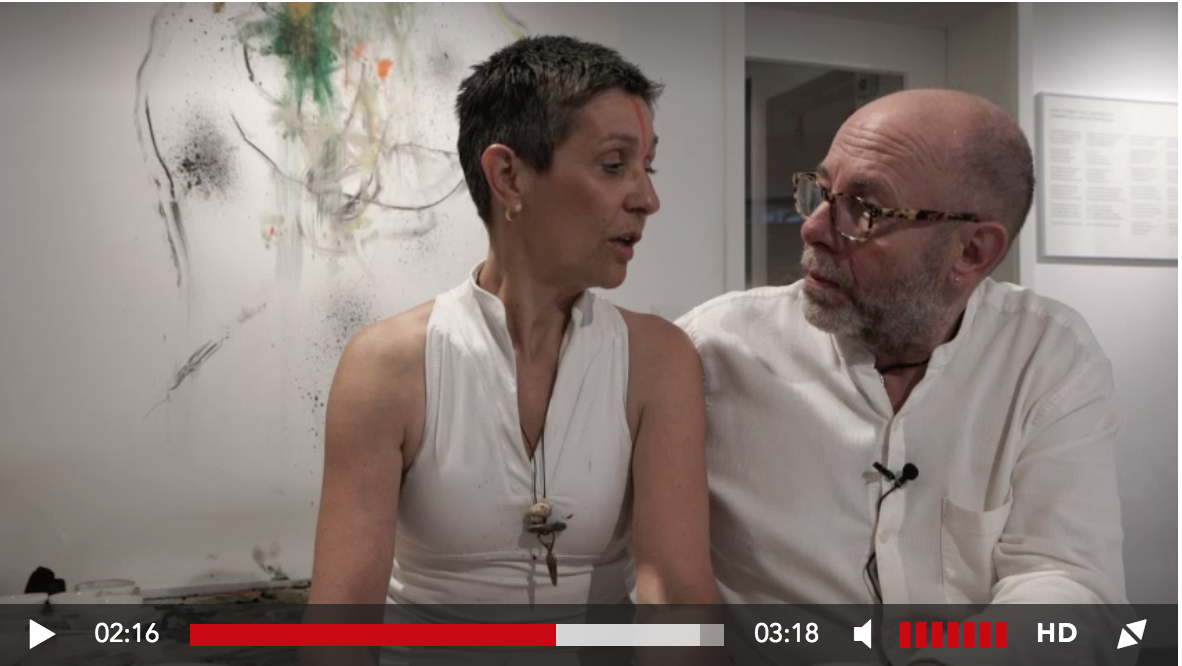 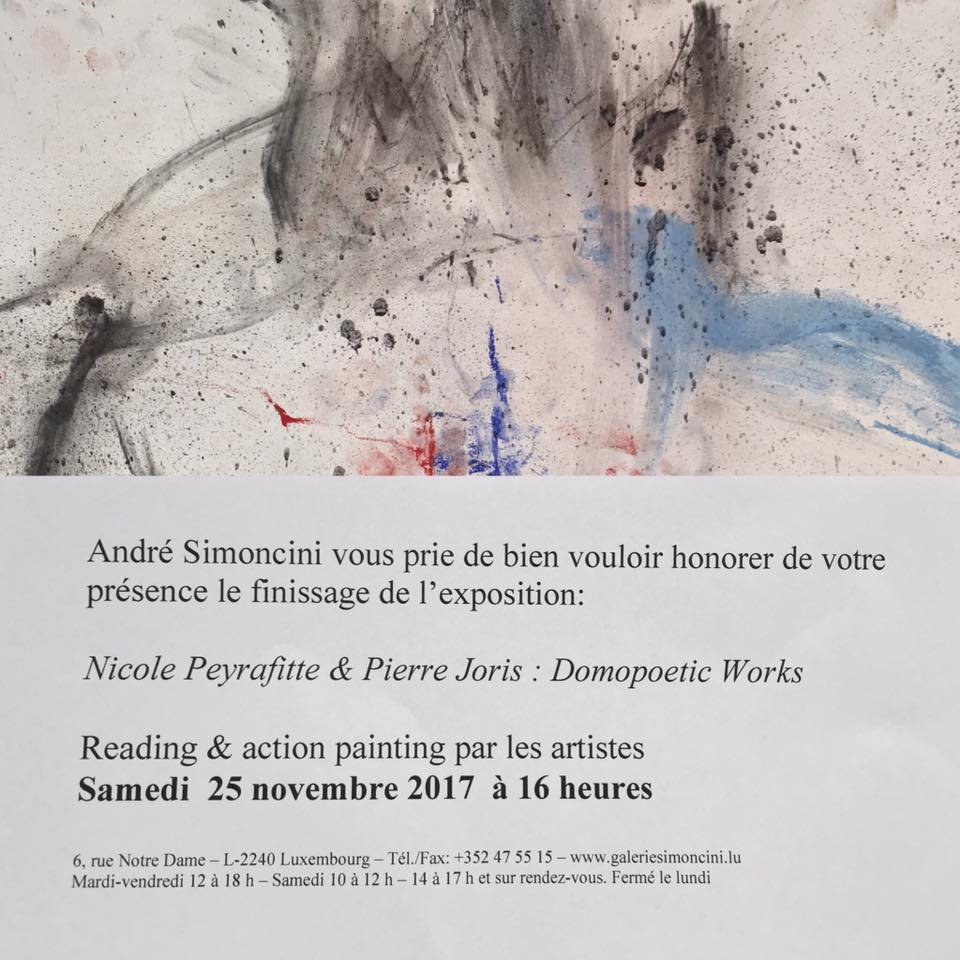 We are looking forward to see you at the finissage or, if coming to Luxembourg is not an option, visit our extensive documentation of the show here .

Amazing week (preparing, setting up, installing) and uplifting weekend (painting, reading, performing) at the Simoncini Gallery in Luxembourg. We had a three-day opening party during which we nomadically performed our collaborations moving across the three floors of the exhibition.

At the lower level we have installed a complete set of Pierre Joris’ publications — about 60 books & chapbooks moving between poetry, essays & translations. The earliest publications date from 1969; in 1990 begins the years of our collaborations: it includes art work I created for Pierre’s books & videos (12 are available at the galerie) on Pierre’s life & work.
The readings at that level thus focused on our Domopoetics world. The readings on the 1st floor (or 2nd floor in the US!) focused on my recent books & carnets as exhibited there. The performance on the ground level was dedicated to live Action Paintings — I made 5 this weekend! — with Pierre reading from The Book Of U, his new book of poems published by Editions Simoncini with my translation and illustrations for the limited edition.

So far this has been a truly superb experience for us and, we hope, for the many visitors, from old friends to the people who came in because they saw the action in progress from the street.

The show will run until November 26 and a few more Actions will occur.

With many thanks to André Simoncini & Ingrid Anders and their incredible team of collaborators who made it possible.

Here is the first batch of documentation organized by sections:
Opening Weekend Actions: 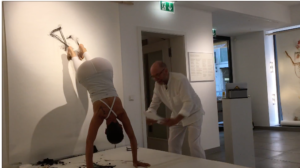 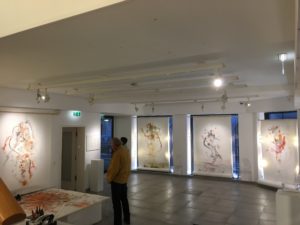 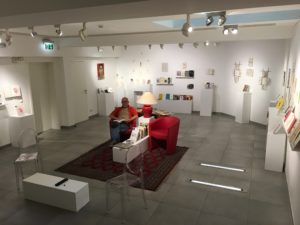 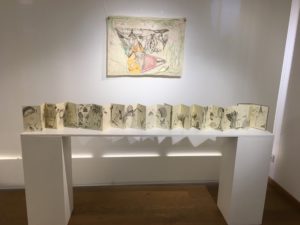 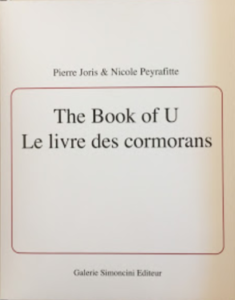 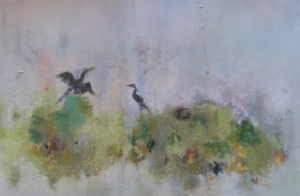 And if you are invited to the finissage at 4PM on Saturday November 25!

Right now we are in the final stage of readying a 3-tier 5-week show at the Galerie Simoncini in Luxembourg-City. The opening is Friday October 20 at 6 p.m. and we will be conducting performances throughout the weekend.

The exhibition runs from 20 October to 26 November. The address of the Simoncini Gallery is 6, rue Notre Dame, Luxembourg, GD of Luxembourg. Phone: +352 47 55 15. — www.galeriesimoncini.lu

First floor: ACTION PAINTINGS — on 20 October at 6:30 p.m. and on 21 & 22 October at 4 p.m. Paintings created live by Nicole Peyrafitte — “Painting here is an intuitive and physical resultant, a kinesthetic experience” — with Pierre Joris reading from The Book of U / Le livre des cormorans translated by Nicole Peyrafitte & published for the occasion by Editions Simoncini in both a bibliophile & a paperback edition.

Basement: DOMOPOETIC ZONE — An installation by Nicole Peyrafitte of Pierre Joris’ literary universe.
Here you may consult the complete collection of Joris’ books, Peyrafitte’s illustrations & covers for many of these, as well as a range of videos of Joris by Peyrafitte. 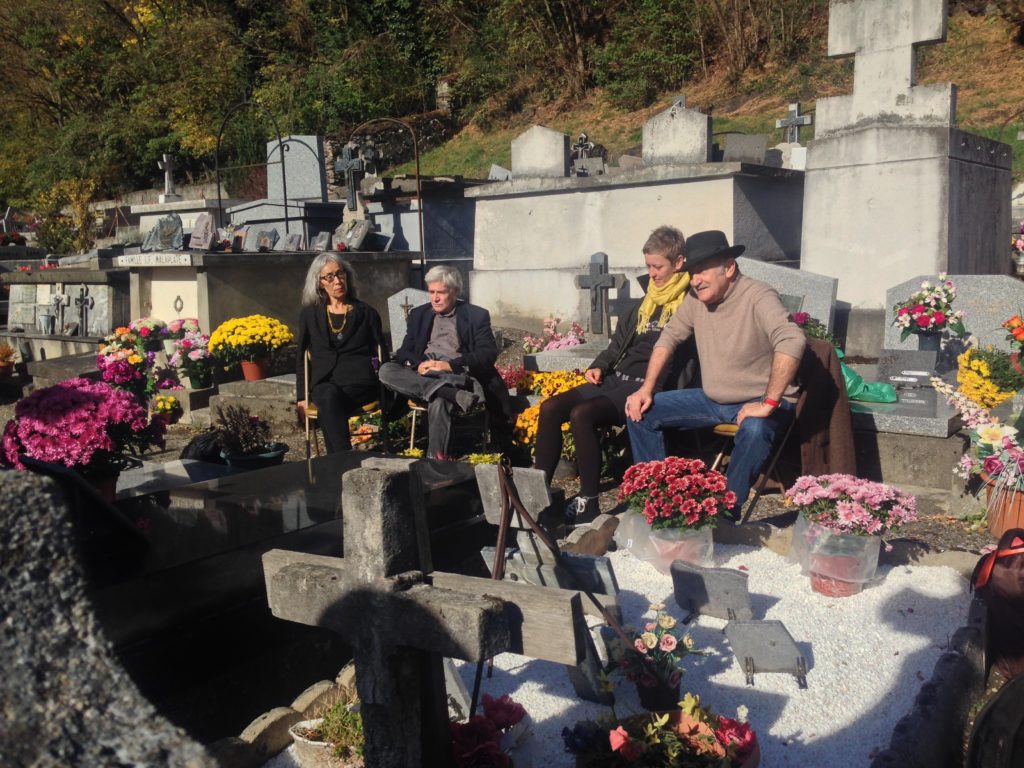 THINGS FALL WHERE THEY LIE, a 58-minutes cinéma-vérité documentary feature directed by Nicole Peyrafitte is in its final stages of completion & has already been submitted to various festivals. We will keep you updated and will share a trailer very soon. Meanwhile here is the synopsis:

A filmmaker invites 4 characters for a 5-day visit to Bagnères-de-Luchon, the once-upon-a-time famous and fashionable spa town in the French Pyrenees. The four visitors are Eric Sarner, a poet, translator and broadcaster born in Algeria, now living in Berlin; his wife Katalin Pataki, a Hungarian-born librarian — they met when both lived in Uruguay; and Yuko Otomo, a poet and visual artist born and raised in Japan, who lives in New York with her husband, Brooklyn-born poet, visual artist and jazz critic Steve Dalachinsky. The film follows this group of real-life characters as they are prompted to react to a daily itinerary of (old folklore) events, mysterious (burial) places, excursions, and locals revealing — or not — the connections to the many layers of the town’s and the filmmaker’s history. Can Karl Marx’s grandchild and swing era jazz violinist Michel Warlop meet? Can four languages find each other over lunch and be the talk of the town? Who is buried in what grave? Where did that wedding ring roll? Is he a real shepherd and who is riding on the one (town) horse? What is a better clue: a prehistoric cave or a Spanish border town? Jump on the train and ride that line: Things Fall Where They Lie, and not the other way around.