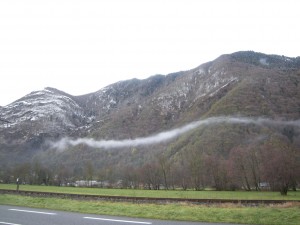 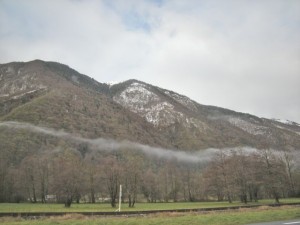 I am now in my birthland to gather more info on Augustus Saint-Gaudens (1848-1907) whose father, Bernard Saint-Gaudens,  was born in the village of Aspet in 1816. I will not go into details about it now,  but briefly want to share yesterday’s photographs, impressions & menu.

I left Luchon —family hometown where I am based— around 9:30am, a lovely & very unusual cloud was ornamenting the mountain. It looked like a natural pre-Xmas decoration or rather like a true pagan one! I drove away from the high peaks towards the luscious Pyreneans piedmont. The cloudy skies cleared and revealed an intense deep blue that I have only seen here. I drove what I think is the exact same road Augustus Saint-Gaudens traveled in December 1897 to journey from his father’s birth village, Aspet, to Salies-du-Salat where the dad grew up from age 6 till around 16.  The distance between the villages is about 20 kilometers. Except for the asphalted road, the landscape remains identical to the one Augustus admired over 100 years ago. There were no other cars than mine for several miles, no modern constructions, the few farm houses looked over 100 years old and the stunning panorama of the high peaks in the background was certainly unchanged! 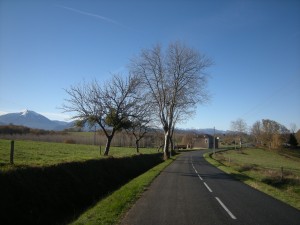 I arrived in Salies-du-Salat around 10:30 am. A phone call to an elder resident pointed me to Bernard Saint–Gaudens’ family house. Despite some remodeling, the shape of the house/street remains pretty much the same as they do on the picture Augustus Saint-Gaudens took in December 1897. In the background, and from far, the 11th century tower and the 14th century church ruins are also the same, except for the tree in front of the tower. 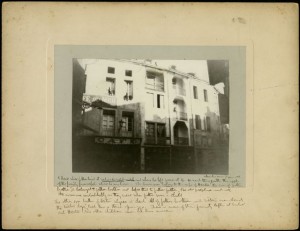 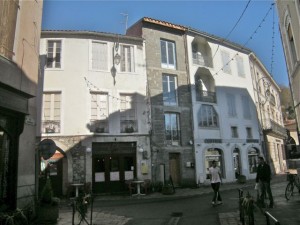 Seeing Bernard’s house in the sharp winter colors & the crisp, clear Pyrenean air left me exalted. I got back on the road to meet a long time friend for lunch at Auberge Beaurivage, an excellent Basque restaurant that I was very much looking forward to try —the chef is a true Basque man — as we are only 2 hours away from the Basque country. As time was limited we had the menu du jour, though chef Philippe Picabea offers a selection of original creations as well as traditional Basque dishes that people drive many miles for. 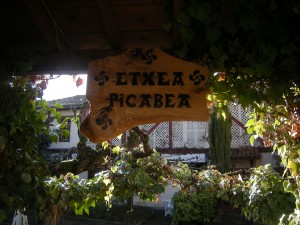 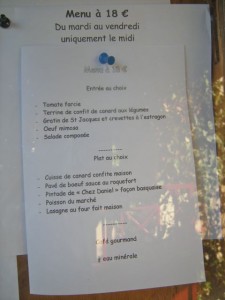 I had a very fresh, perfectly dressed & copious “salade composées” that included green beans, cucumbers, hard boiled eggs, greens, plenty of onions & tomatoes. As an entrée my friend and her son had filet mignon with a Roquefort sauce. I had a pan-fried lemon sole with a moist and tasty potato & artichoke gratin. For dessert came a large rectangular plate that contained an espresso coffee surrounded by 4 mini desserts: a small cup of light rice pudding, a mini chocolate crème brûlée, a slice of cherry gateau basque, and a tiny cannellé. Price of the menu is €18. Totally worth it and compared to what I had so far on this trip this is rather cheap and one of my best meal. We had no wine as we both had to work in the afternoon. Voilà! Off again to the town of Saint-Gaudens for more work.