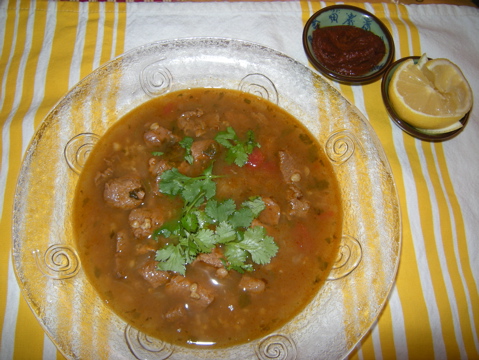 Soups are made everywhere in the world with all kinds of ingredients. Many appealing adjectives can describe them: healthy, earthy, cheap, restorative, easy to make, filling, convenient, the list is infinite. First lets clarify some terminology:
At the beginning the “soupe” was the bread dunked into the broth. This tradition remains ­– think for example of how in this country crackers or bread are inseparable from a bowl of soup.

If you are a beginner cook, soups are great to experiment with as it is rather difficult to ruin a soup.
Though all soups aren’t born equal and here are a few examples from the fanciest to simplest:
Consommé: a clarified meat or fish broth.
Bisque: puréed shellfish with cream soup.
Velouté or Crème: vegetable or meat based thickened with eggs yolks, butter and cream
Potage: falls somewhere in between velouté & soup texture and thickness.
Soup: refers to a thick, earthy chunky melange; think of French Onion soup, Bouillabaisse (fish stew soup), and last but not least the Garbure! also the title of my performance The Garbure Transcontinentale/The Bi-Continental Chowder where I cook this original recipe on stage, mirror the ingredients with songs and then share the soup with the audience. I am including the 10-minute video at the end of this post.

Today I will pass on a North African soup or chorba recipe that my partner Pierre Joris learned while living in Constantine, Algeria. This is one of our favorite winter dinners and we always eat it as a “plat unique”, or only course, and eat several plates. Follow it with a salad of fresh oranges with cinnamon, mint and chopped almonds for dessert.La Chorba de Pierre
Ingredients :
for 8 people
2 lbs of Lamb – shoulder cut into small pies & save bones
1 big Onion, finely chopped 1 heaped spoon of sweet Paprika
Salt-Pepper
1 big bunch of Fresh Cilantro/coriander; 1/2 cup finely chopped. The rest of the bunch divided in half. The first half will be tied and dropped in the pot once all the other ingredients and the water will be in. Second half chopped and served as garnish at the table
2 cloves of Garlic, finely chopped
2 quarts of Water
1 diced fresh Tomato in summer; or 1/2 cup of canned organic diced tomato in winter
1 Cup of washed Freekeh (green wheat available at middle eastern markets and some health food stores, Bulgur can be substituted, but will not have as rich and complex a taste)
Harrissa : 1 tube or can (a North African hot red sauce or paste made from chili peppers, garlic, coriander and caraway or cumin. It may also contain tomatoes.You can get Harrissa

du Cap Bon by clicking on the link or you can make your own.)
Lemon (2): quartered to serve at the table as garnish

is the one we do prefer, a once in a life time investment!– when oil is warm, sauté the onions until translucent. Add the meat and bones, sauté thoroughly. While the meat is browning, add the Paprika, Salt, fresh ground Pepper and the 1/4 cup of Fresh Cilantro, mix well and keep sautéing for a few minutes. When nicely browned add the water and the tied bunch of Cilantro, bring it to a boil, lower the heat and simmer for 1 1/2 hour.
At that point remove the Cilantro bunch and the bones (if you wish). Add the cup of Freekeh and the chopped tomato. Bring to a boil, reduce and simmer for about 1/2 hour or until Freekeh is cooked.
Bring garnishes (Lemon, Harrissa, Chopped Fresh Coriander/Cilantro) & Chorba at the table. Each person fills a plate, adds their desired amount of Harrissa (I use 1/2 a teaspoon but be careful you can always add some but it is difficult to take it out!)
Enjoy: it will warm the cockles of your heart!