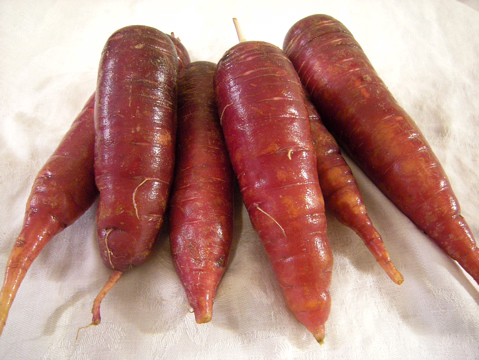 Purple dragon carrots from Nesenkeag Farm
Mange des carottes, ça rend aimable! Eat carrots and you will be kind! or, eat carrots and they’ll make you a pleasant person!

How many times did I, like any French person, hear that saying? Countless times. As a kid, I can’t say I disliked carrots, but the moral value that supposedly came with them infuriated me. What did that imply? Was I not a sweet little girl? I do, and still do, take sayings (too) seriously!
At the family restaurant carrotes rapées were always on the crudités cart, dressed with vinaigrette and garnished with parsley. Another carrot dish that appeared regularly on the menu, and that I liked very much, is carrotes Vichy. These sweet glazed carrots would be flanked by a slice of beautiful veal loin roast drenched in flavorsome intense jus. My grand father’s recipe was simple and looks like the same recorded on his (now mine!) Escoffier cookbook:

Carottes à la Vichy:
Place the (sliced) carrots in a skillet with enough water to almost cover them, add 30 grammes of salt, 30 grammes of sugar and 60 grammes of butter per 1/2 litre of water. Set up “en timbale” (in this case it means to fill up a greased individual ramekins with the cooked carrots and turn them out on the serving dish or plate). 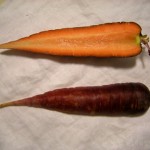 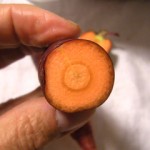 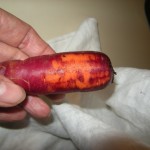 The carrots I took pictures of are Purple Dragon carrots. They were the last veggies left over from my wonderful trip to Nesenkeag Farm a few weeks ago. I never had these carrots before, I usually stay away from “trendy” foods, but Liana & Eero generously send me home with 2 lbs of them and I got curious.
One anecdote before I get into carrot history:
I brought a few to Alime at Aunt Halime’s Halal Meat, as she always shares Turkish delicacies. I though it was going to be a hit, but Alime looked at the purple carrots made a very disapproving face and said something like “beurk! chemicals, you can’t trust supermarket!”. I am not sure she trusted me about the carrots exquisite provenance, but it got me even more curious and I decided to look closer at the history of the carrot. Have carrots always been orange? 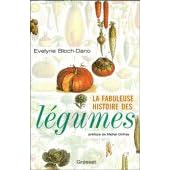 This summer I got a French book (thank you Pierre!) called “La Fabuleuse Histoire des Légumes” or “The Fabulous History of Vegetables” by Evelyne Bloch-Dano. Yes, I have translated “légumes” by “vegetables” because that is what the word means in the French sense of it. The book tells stories about leguminous plants, such as beans and peas, but also artichoke, Jerusalem artichoke and others. About carrots she writes:

In the 1930’s Vavilov, the Russian biologist and his team were doing research in the context of the improvement of cultivated plants in the service of Soviet Agriculture. They discovered spieces of volunteer and hybrid carrots in Afghanistan and Kashmir. Their appearance differs from wild carrots under our climate : their roots are meatier, bear little ramifications and most of all their colour ranges from purple and pink to orangy yellow…

Then Evelyne Bloch-Dano mentions Ibn al-‘Awwam, the 12th century agriculturist from Seville, who in turns reports on a 4th century book on Nabatean Agriculture and the fact thatred and yellow carrots were known to Palestinians. Ibn al-‘Awwam also speaks of red carrots in Spain at that time. In Spanish carrot is Zanahoria, and the origin of the word is quite controversial and interesting.
It is common to find entries giving an Arabic origin: safunariyat, isfranija. But the word may also possibly have a Berber origin, asfenaria . Mais encore, a Basque origin is not excluded: zain and horia which means “yellow root”, and carrots where more often red and yellow than orange. Others again posit as Aramean origin…Well, I am letting you sort it out and if you are germanophiles look at the entry below by the distinguished German linguist Hugo Schuchart: 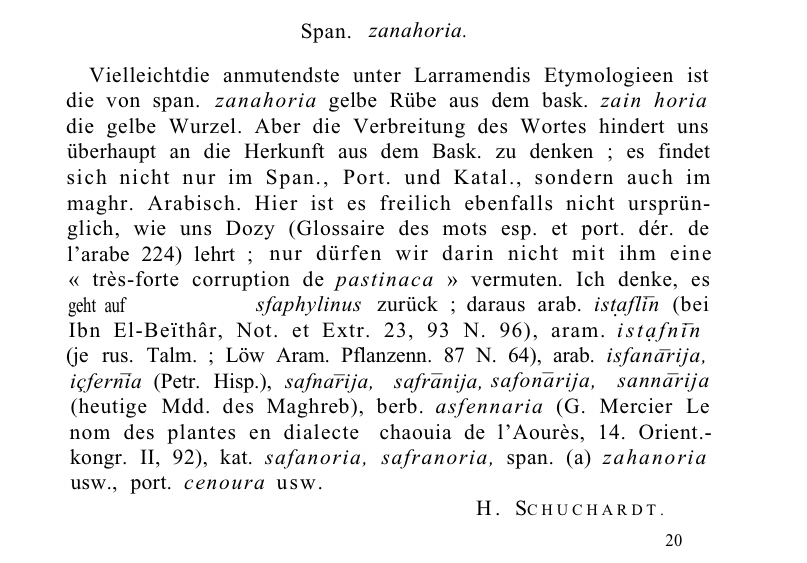 Bloch-Dano reports that Apicius mentions a white “carota”, eaten fried or en salade, and that white carrots were mistaken for parsnips. But when did the carrot became orange? She notes that we can follow the appearance of orange carrots through Dutch paintings like Pieter Aertsen’s (1508–1575) ” Market Woman with Vegetable Stall “. She argues that Dutch painters recorded orange carrots about 200 years before any agriculture treatise; 1721 would be the first mention of the orange carrots from Holland. We don’t find any record in France until 1770.

Voilà! I was just going spend a couple hours writing a quick blog about carrots; and here I am, eight hours later and sore from kneeling on my computer chair (told you I was brought up catholic!). After traveling virtually through continents, countries, languages I can now answer confidently:
No! carrots have not always been orange! Looks like they are a Dutch invention to celebrate the Orangist movement.
Yes! I ate my Purple Dragon carrots. I sautéed them with cabbage, ginger and garlic topped this with a steak haché (hamburger, with no bun, I don’t do sandwiches for dinner). Purple Dragon carrots are good, though I must say they have a far more interesting look that taste. The juxtaposition of purple and orange is stunning. For taste I prefer the orange ones. I ate some of the Purple Dragon carrots raw tand they do taste nuttier and stronger it is no doubt a hardier vegetable.

One more thing before I go stretch and breathe some fresh air: there is a great article and photo montage on the Christian Monitor website about Nesenkeag Farm: An organic farm grows all the peas and pods 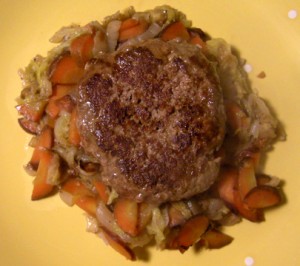