It can be spelled Molokhia, Mulukhiya, Malukhiya, Molokia; A.k.a: Juteplante in Germany, Jew’s mallow in the UK, corète potagère or chanvre du bengale in France, Crain-Crain or Krin-Krin in francophone’s Africa, Corchorus Olitorius in Latinand finally, in Arabic, ملوخية. Until my trip to a Syrian grocery store yesterday in Bay Ridge, NY, I had never heard of it. It is a very well known Middle Eastern & African mucilaginous leave-vegetable that grows easily; it belongs to the family of the Tiliacea. It as been cultivated for century both in Africa and Asia, it is found wild on both continents.

Same family as jute (white jute is Corchorus capsularis and Tossa jute Corchorus olitorius). Raw jute was exported to the western world to make cordage, ropes and is better known in the USA as burlarp.

Once cooked the leaves produce a viscous or gooey texture similar to okra. I bought a frozen pack and since I knew nothing about it, I just followed the simple recipe on the package, just adding a few pickled chili pepper . Next time I will add a few drops of fresh lemon juice. 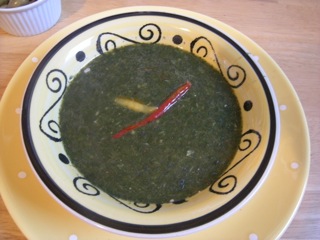 So voilà! my dinner last night:  Molokhia soup and a batch of home made French fries. It was a quick, unusual and satisfying dinner.