We made it to Idaho! Not yet in Boise, but close since we are 128 miles away. Today we drove 403 miles (649 Kms) from the high desert land —just above 7,000 feet (2134m) above sea level. We bid farewell to I-80 that had taken us all the way from some 5 miles beyond the Holland Tunnel in New Jersey & on route 30 Pierre readjusted to driving on a classic two lane blacktop! We were on the lookout for wild life since there was many warning sign about deer & elk roaming;the  temperature being 5ºf (-15c) the fauna kept under cover except for a very low altitude majestic soaring bald eagle. We crossed the border at a place called Border, WY!

For months I had made plans to visit the Idaho Potato Museum in Blackfoot & we did! The small museum is mostly about the industrialization of the potato in Idaho. They pride themselves on displaying info that goes “From the original potato planted in Idaho, to the largest potato crisp made by the Pringle’s Company in Jackson, TN”. The famous Idaho potato is a Russet Burbank, developed from the heirloom Early Rose parent plant by Luther Burbank in 1872.
There is a lot to say about the origin of the Potato, but I will limit myself to repeat what you certainly already know, namely that the potato originated in Peru and was unknown to the Europe until the Spaniards brought it back to their country of origin. I am saving the rest for my class at BSU!  Driving down to Twin Falls we could see miles and miles of the winterized fields of spuds & their storage facilities. Both  Pierre & I had hoped to find a nice organic, local baked russet potato with all the toppings for our dinner, but no such luck — a shame, as we are looking forward to break our diet! — We usually don’t eat potatoes but when in Idaho do like the Idahoans!

Originally we had planned to drive to Pocatello to get closer to Boise but I asked the lady at the museum what scenic location she would recommend us to see on the way south. She highly recommended the Shoshone Falls, located at the edge of Twin Falls, on the Snake River. The falls are higher than Niagara Falls (At 212 feet). Great suggestion to get to see  another spectacular scenery.

Lunch was to finish up what was left in our cooler. I made lettuce wraps with hummus, red bell pepper, fennel, cheddar — lovely!, while dinner was a brown rice bowl & a salad at the very mediocre restaurant of the hotel.

I have many more videos & pictures to share but tonight we are fried & starting to think about our new life in Boise Idaho! 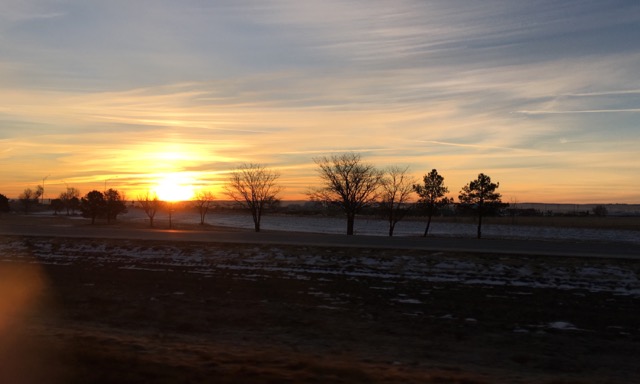 Day #3  Des Moines, Iowa – North Platte, Nebraska: 400 Miles 644Kms
We left Des Moines a little after 9AM since we opted for a lighter driving day . It was 19ºF /-7ºc when we left Iowa. The light fog wrapping the windmills was beautifully quixotic. The fog had cleared by the time we reached Nebraska and clear skies accompanied us to North Platte.

We filled up the car & had breakfast before leaving so we stopped only for lunch. No rest stop extravaganza today, au contraire we opted to lunch at the Mormon Island State Recreation Area conveniently located off I-80. Named for the winter stopover used by Mormon emigrants heading westward we enjoyed lunching by the frozen lake and watching some locals ice fishing.

We then headed to North Platte where we had a blast visiting the Buffalo Bill residence’s outdoors grounds since the location is closed for the winter. On this Sunday afternoon North Platte was a pretty empty town and very few of its 24 000 inhabitants were visible. But the world’s largest Rail Yard sure was! After spotting the longest train we had ever seen going through town, we decided to visit the train yard and got there right on time to climb to the top of the The Golden Spike Tower and Visitor Center & what an amazing view!

This location was chosen because of its close proximity to the Platte river and to Grand Island. Nebraska’s been a railroad center since the Union Pacific Railroad first reached here in July 1866 & that first train rolled through what was known at the time as “Hell on Wheels” town. Today Bailey Yard, named for former Union Pacific president Edd H. Bailey, is the world’s largest train yard. Covering a massive 2,850 acres, each day Bailey Yard manages 10,000 railroad cars. Of those, 3,000 are sorted to make sure the cargo reaches its final destination. We sure did see some action from the Golden Spike Tower. We watched a gorgeous sunset and went to find our motel for the night.

Again we were able to make our lunch, dinner, coffees & teas. Lunch was a tuna fish salad into which I mixed the last of the grains — faro, rye & oats mixture — diced daikon, carrot, celery, red pepper, dressed w/ PJ’s Meyer lemon vinaigrette. Pierre had cheddar I had goat cheese with bran crackers,nuts & a clementine. For tonight’s dinner we finished the lentils as a soup, made a salad & used the last of PJ’s dressing, Blue Iowa Maytag plus apples & walnuts for dessert. Tomorrow a longer ride: trying to get to Rock Spring Wyoming!

And now if you have travel so far with us you might want to watch a freight train passing by for almost 3 minutes — and that is not even the full train. Mesmerizing! 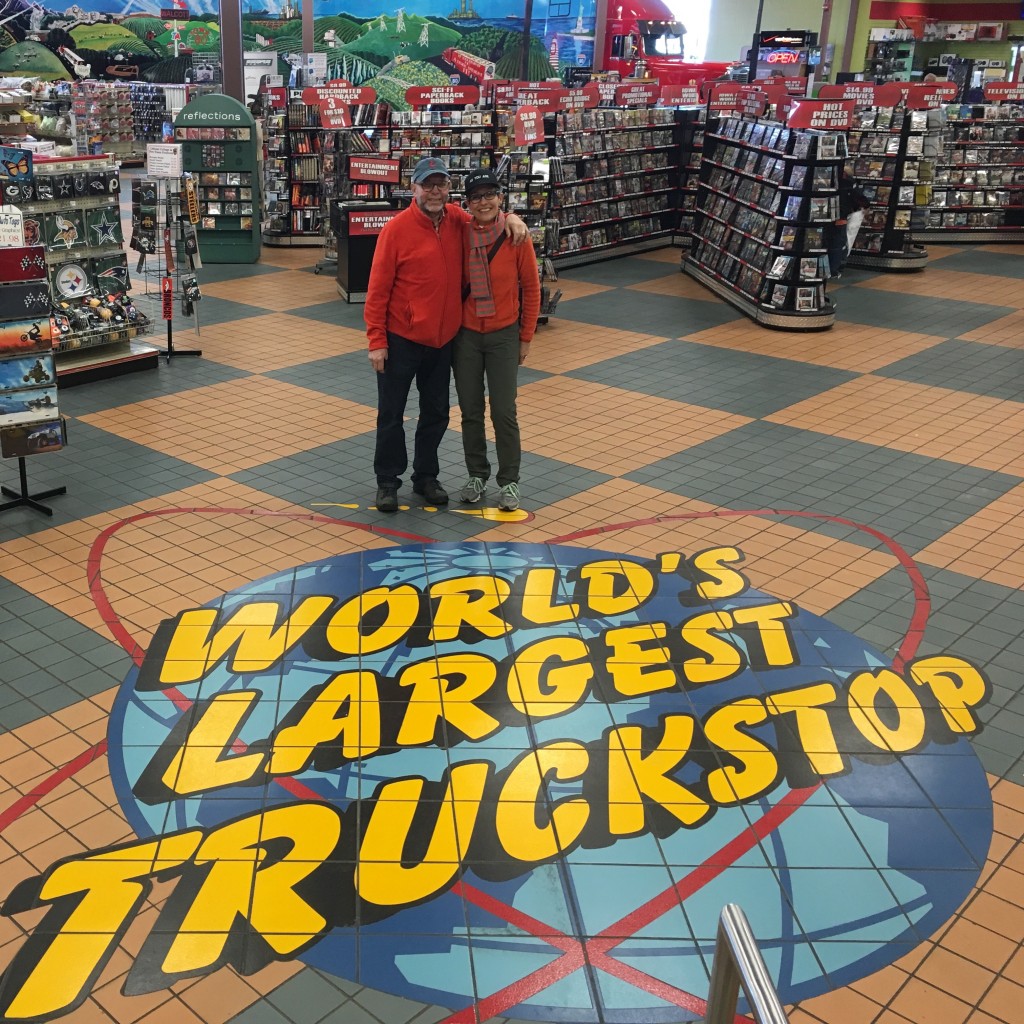 After drinking Pierre’s prepared cup of warm water with lemon & cayenne pepper water & our travelling green magic juice we hopped in the car at 7:50am to resume our journey West on I-80.

When we stopped for gas in Greenfield, Indiana we were reminded that if we wanted a soda, we should ask for “pop”! The lady at the Hardee’s was eager to take our order but we had our solid breakfast of pumpernickel bread, butter & cheese & we made coffee in the car.

Second stop was in Morris, Illinois & the R-Place Restaurant with its collection of antique toy displays, including a wonderful puppet show kept me busy filming & photographing for a while. I did ask for 4 quarters to play the puppet show. The clerk was proud to tell me that the puppet show grossed $80 per month, that was 320 plays.

Again we didn’t get any food though I considered the Strawberry Pillows for a solid minute — but by looking at the thing intensely I could almost taste it & that was enough to feel the sugar rush!

We left Illinois, crossed the Mississippi, & drove into Iowa.

I had noticed on the Waze app that the World’s Largest Truckstop was coming up on I-80 at the Walcott Exit. We stopped there & lunched on Romaine lettuce with carrots, celery, left-over pork roast, sardines, cheddar dressed with Pierre’s delicious Meyer lemon & olive oil vinaigrette & concluded with our usual plain yogurt with cinnamon, stevia & grilled seeds.

Then we had molto fun visiting the amazing World’s Largest Truckstop. We didn’t make it to the adjacent truck museum but we had a lovely time talking to several truckers who were trying new truck seats. Pierre joined them for a tryout of new-fangled special rubber seating. We exchanged our destinations & they advised us that road conditions between Cheyenne & Idaho can be very bad & told us to make sure to have a full tank of gas when starting this portion of the trip. Another trucker & his wife from New Orleans gave us the price of some of the chromes on display. “A $1000 for that apron. I’m gonna put some on my truck soon”. The sword & knife window display was open & a family was deciding what kind of knife to buy; a lady bought a mini gun. Pierre checked out the library section & considered buying a Louis L’amour Western audio book but since we had just started listening to the Lewis & Clark journal diaries  available free here,  we decided to pass.

Settled into our comfy Sterling Hotel suite —with terrible internet, after a quick trip to the Wholefood to pick up a salad & some cheese (a chunk of excellent! Iowa Maytag Blue — same family making blue cheese since 1941!) we had dinner, i.e. yesterday’s lentil salad turned into a stew to which I added some grains (farro & oats), followed by apples, nuts & cheese — the Iowa maytag, of course. & now some zzzz before heading to Wyoming. From here on out the route is new, for Pierre too who had driven this part of I-80 only to turn south here in Des Moines to visit with Ken Irby in Lawrence, Kansas. But that was in 1987, & this is today. Onwards! Let the wagons roll…