I am off Thrusday for 4 weeks to the South of France. First stop will be in Lodève (30mns Northwest of Montpelier) were I have been invited to the Festival Voix de la Méditerranée. The 10 days Festival hosts 80 poets/performers, 350 free readings in a 7500 people town! I have never been to Lodève and I am excited to dig into the history of the area. At around 300 B.C the town was a Volque capital, and I can’t wait to see the dolmen of Coste Rouge (see pix above).
Also interesting is the The Coat of Arms of the city of Lodève..–wink wink to poet Dave Brink & Megan Burns in New Orleans–. Once again: “Things fall where they lie”, when you will know that my next extended performance project will be the result of a -very- heuristic research project in New Orleans! 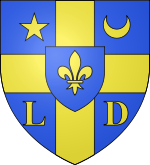 Back to Lodève for now:
I will be performing every day at different times and different places. In case you would like to stop by, there is the detailed schedule at the link below: http://www.voixdelamediterranee.com/2008/index_poetes.html.

After that I will be going to my native grounds to perform my documentary performance on Augustus Saint Gaudens at the Théatre du Casino de Luchon with marvelous baritone Jean Ribet and pianist Carine Pérez, Sunday August 10 at 9PM. Click picture below for details.

I’ll report and post pictures as often as I can, you should subscribe to the RSS Feed to get automatically updated.

“SUVs in America are competing with eaters around the rest of the world for good food and arable land. You can imagine who is going to win.” Michael Pollan

Michael Pollan is always an inspiration. He is professor at the U.C Berkeley Graduate School of Journalism, writes regularly for the New York Times Magazine, and author of many enlightening books. Recently I subscribed to his “upcoming events related to Michael Pollan” and I wanted to share the latest communication, this article makes a lot of sense to me:

“I think you’ll be interested in this interview, “Michael Pollan on What’s Wrong With Environmentalism,” from a terrific new on-line environmental magazine called e360. It’s published by Yale University and edited by Roger Cohn, the former editor of Mother Jones and Audubon –and is full of good stuff.
http://e360.yale.edu/content/feature.msp?id=2031
Best,
Michael”

Clich her for Michael Pollan website for a complete bliography and more info.

Under the “Modernization of the Institutions of the 5th Republic” the French Assemblée Nationale voted YES to the Amendement Nº 605 . The amendment reads:

Article 1 of the Constitution is completed by a sentenced that reads:
” Regional languages belong to the national heritage ”

Then the amendment went to The French Senate, and there June 18th, my birthday, the senators rejected it (216 against / 103 for). If you read French you can check out the article in Le Monde.

This is very sad because not only are the regional languages part of the French national heritage, but I also truly believe that strong regional culture is the best way to resist globalization and promote sustainability at many levels.

The senators reasons for rejecting the amendment are xenophobic and show a terrible lack in their own culture. Below, an example of the debate’s level.

Senator Michel Charasse (ex-PS -the socialist party- recently expelled from that party, he represents the Puy-de-Dôme):

“I was surprised to see the national Assembly propose an amendment favoring the classification of regional languages as part of the French National Heritage. Why not also include historical monuments, gastronomy like the potée from Auvergne?

Mr. Charasse, who is from Auvergne, and probably fell into a pot of potée when he was a little boy (reference to Asterix le Gaulois!), is now so self imbued that transmission of culture is not his concern or stops with him.

Anyhow, if I understand the process correctly the goose is not yet cooked. We are now starting the “navette” or a “shuttle” process. The amendment will return to the Assemblée for another round of discussions, and maybe undergo modifications before being submitted to a new vote, after which it would be sent back to the Senate. This process can happen several time and if consensus is not reached another set of procedure will be applied. To become part of the constitution, the Amendment has to be ratified by both chambers.

Affaire à suive/ To be continued!

Important links on the topic:

Detailled vote of the Senators:
http://www.senat.fr/scrupub/2007/scr2007-98.html#correctif

Buffalo, NY–Dr. Steven Kurtz, a Professor of Visual Studies at SUNY at Buffalo and cofounder of the award-winning art and theater group Critical Art Ensemble, has been cleared of all charges of mail and wire fraud. On April 21, Federal Judge Richard J. Arcara dismissed the government’s entire indictment against Dr. Kurtz as “insufficient on its face.” This means that even if the actions alleged in the indictment (which the judge must accept as “fact”) were true, they would not constitute a crime. The US Department of Justice had thirty days from the date of the ruling to appeal. No action has been taken in this time period, thus stopping any appeal of the dismissal. According to Margaret McFarland, a spokeswoman for US Attorney Terrance P. Flynn, the DoJ will not appeal Arcara’s ruling and will not seek any new charges against Kurtz.

For over a decade, cultural institutions worldwide have hosted Kurtz and Critical Art Ensemble’s educational art projects, which use common science materials to examine issues surrounding the new biotechnologies. In 2004 the Department of Justice alleged that Dr. Kurtz had schemed with colleague Dr. Robert Ferrell of the University of Pittsburgh Graduate School of Public Health to illegally acquire two harmless bacteria cultures for use in one of those projects. The Justice Department further alleged that the transfer of the material from Ferrell to Kurtz broke a material transfer agreement, thus constituting mail fraud.

Under the USA PATRIOT Act, the maximum sentence for these charges was increased from five years to twenty years in prison.

Dr. Kurtz has been fighting the charges ever since. In October 2007, Dr.Ferrell pleaded to a lesser misdemeanor charge after recurring bouts of cancer and three strokes suffered since his indictment prevented him from continuing the struggle.

Finally vindicated after four years of struggle, Kurtz, asked for a statement, responded stoically: “I don’t have a statement, but I do have questions. As an innocent man, where do I go to get back the four years the Department of Justice stole from me? As a taxpayer, where do I go to get back the millions of dollars the FBI and Justice Department wasted persecuting me? And as a citizen, what must I do to have a Justice Department free of partisan corruption so profound it has turned on those it is sworn to protect?”

Said Kurtz’s attorney, Paul Cambria, “I am glad an innocent man has been vindicated. Steve Kurtz stared in the face of the federal government and atwenty-year prison term and never flinched, because he believes in his work and his actions were those of a completely innocent man. Clients like him are a blessing, and although I have had many important victories, this one stands at the top of the list.”

As coordinator of the CAE Defense Fund, a group organized to support Kurtz from the beginning of the case, Lucia Sommer sees the end of the prosecution as bittersweet, and like Kurtz, is thoughtful about the broader significanceof the case: “This ruling is the best possible ending to a horrible ordeal–but we are mindful of numerous cases still pending, and the grave injustices perpetrated by the Bush administration following 9/11. This case was part of a larger picture, in which law enforcement was given expanded powers. In this instance, the Bush administration was unsuccessful in its attempt to erode Americans’ constitutional rights.”

Referring to the international outcry the case provoked, involving fundraisers and protests held on four continents, Sommer said, “The government has unlimited resources to bring and prosecute these kinds of charges, but the accused often don’t have any resources to defend themselves. This victory could never have happened without the activism of thousands of people. Supporters protested, vocally opposed the prosecution, and refused to let it go on in silence. And without their efforts at fundraising, Kurtz and Ferrell would not have been able to defend themselves
from these false accusations.”

Sommer added that the next step for the defense will be to get back all of the materials taken by the FBI during its 2004 raid on the Kurtz home, including several completed art projects, as well as Dr. Kurtz’s lab equipment, computers, books, manuscripts, notes, research materials, and
personal belongings. The four confiscated art projects are the subject of an exhibition entitled SEIZED on view at Hallwalls Contemporary Arts Center in Buffalo, NY, through July 18:
http://www.hallwalls.org/visual_shows/2008/show_seized.html.

Background to the case

Dr. Steven Kurtz is a Professor of Art at SUNY Buffalo and a founding member, with his late wife, Hope, of the internationally acclaimed art and theater collective Critical Art Ensemble (CAE). Over the past decade cultural institutions worldwide have hosted CAE’s participatory theater projects that help the general public understand biotechnology and the many issues surrounding it.

In May 2004 the Kurtzes were preparing to present Free Range Grain, a project examining GM agriculture, at the Massachusetts Museum of Contemporary Art (MASS MoCA), when Hope Kurtz died of heart failure. Police who responded to Kurtz’s 911 call deemed the couple’s art suspicious, and called the FBI. The art materials consisted of several petri dishes containing three harmless bacteria cultures, and a mobile lab to test food labeled “organic” for the presence of genetically modified ingredients. As Kurtz explained, these materials had been safely displayed in museums and galleries throughout Europe and North America with absolutely no risk to the public.

The next day, however, as Kurtz was on his way to the funeral home, he was illegally detained by agents from the FBI and Joint Terrorism Task Force, who informed him he was being investigated for “bioterrorism.” At no point during the 22 hours Kurtz was held and questioned did the agents Mirandize him or inform him he could leave. Meanwhile, agents from numerous federal law enforcement agencies – including five regional branches of the FBI, the Joint Terrorism Task Force, Homeland Security, the Department of Defense, and the Buffalo Police, Fire Department, and state Marshall’s office – descended on Kurtz’s home in Hazmat suits. Cordoning off half a block around his home, they seized his cat, car, computers, manuscripts, books, equipment, and even his wife’s body from the county coroner for further analysis. The Erie County Health Department condemned his house as a possible “health risk.”

A week later, only after the Commissioner of Public Health for New York State had tested samples from the home and announced there was no public safety threat, was Kurtz allowed to return to his home and to recover his wife’s body.

A week later, only after the Commissioner of Public Health for New York State had tested samples from the home and announced there was no public safety threat, was Kurtz allowed to return to his home and to recover his wife’s body.

For more information and extensive documentation, including the Judge’s
dismissal, please visit: http://caedefensefund.org