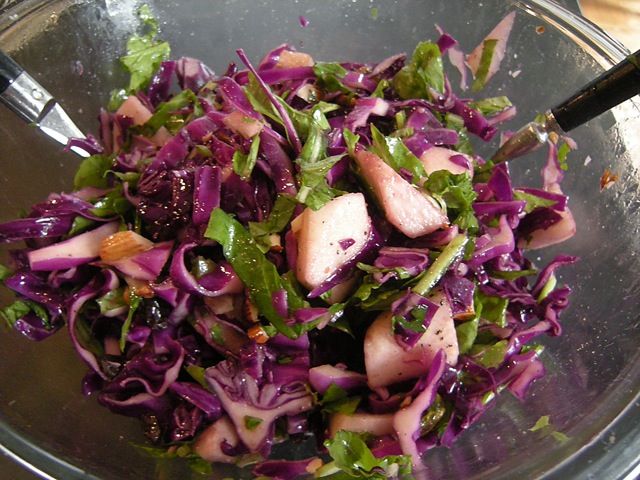 When we took off for France in mid-July I left a purple cabbage (red cabbage is actually never “red”) in the fridge. I was pretty confident it would keep until our return. It was a beautiful purple cabbage from our CSA share and I actually wrote a post and took pictures about that particular share — click here for details. It was a very firm,  bright, shiny and freshly picked purple cabbage.  I must say I was a little surprised to find it in the CSA box so early in the season.  When we returned mid-August, the cabbage was holding great, no obvious signs of aging. It was not wrapped, or in the crisper, but just decorating the middle shelf of the fridge. I still was not ready to eat it; summer veggies were still plentiful and I assimilate cabbage more with a fall/winter food. I became so used to see it in the fridge that I almost forgot to eat it.  But a few nights ago I pulled it out of the near empty fridge to accompany Pierre’s Bay Ridge version of a Luxembourgish dish: the Gromperen plaâ. Only the first layer of the cabbage leaves where a little limp, the rest was still crisp. Before I tell you a little more about the Gromperen  plaâ this is how I made the cabbage salad:
1/2  red/purple cabbage head sliced thinly
1 diced onion
1 diced apple
1 diced celery rib
Chopped walnuts and/or almonds

Moisten all the ingredients with olive oil. Drizzle with vinegar — it can be: apple cider, or rice or light wine vinegar. Add a dash of sesame oil —very little, the goal is to use it to outline the ingredients  not to really taste it (do you  know what I mean?). Then add  fresh  chopped Italian parsley, salt & pepper to taste.

Pierre was supposed to give me the detailed recipe of the Gromperen plaâ but as you can check on his blog he is not home very much these days. In Luxembourgish Gromper means potato & plaâ means dish —plat in French. This is the first dish Pierre’s sister Michou makes when we visit. All the ingredients go into a terrine or a lasagna type dish. As I indicated I don’t have an exact recipe but I think I am right to say that Pierre never really follows one either. This is the kind of dish that is adjustable to what you have and how you feel. I personally encourage this kind of cooking and would like to have the guts to write such a cook book! Now here are the indications for you to make your own potato dish:

Butter  the bottom of the pan.
Line with one layer of sliced parboiled potatoes.
Sprinkle with  diced sautéed onions.
Cut slices of Mettwurscht —the “national” sausage of Luxembourg.
In Bay Ridge we don’t have Mettwurscht so Pierre decided to make the Gromperen plaâ with the Turkish sausage sujuk— a beef sausage usually spiced with cumin, sumac, garlic, paprika and other red pepper —we always get it at Aunt Halime’s Halal Meat Market on 3rd avenue and Ovington in Bay Ridge.
Repeat layers until there is no more room in the dish.
Then fill the dish with seasoned heavy cream—with salt, pepper and a touch of freshly grated nutmeg—  until the top of the pan is barely covered.
Top with a generous layer of shredded cheese – can be Swiss , Emmental , Gruyère or even cheddar!
The result was superb; I had forgotten to take a picture of the dish before we started digging into it and next thing we knew is that the three diners around the table cleaned it up in a flash! The combination of the textures and tastes were perfect. Thanks Pierre and this menu is a keeper! The only disappointment Pierre had is that he thought he was going to have some left over for lunch. Sorry! 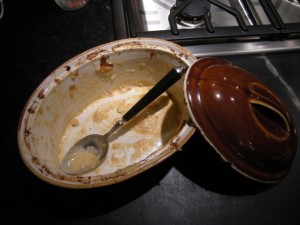